"It pi**** me off!" Jim Furyk incensed by question about US Open

Jim Furyk was less than impressed with this question after his final round of the US Senior Open at Saucon Valley. 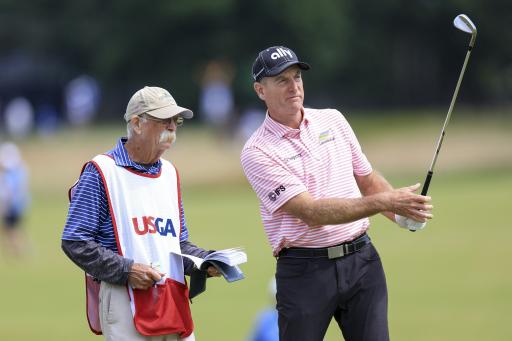 Jim Furyk isn’t the type of person you would usually associate an angry outburst with.

It’s been a frustrating season so far for the 2003 US Open champion. Even he has admitted as much as form has deserted him when typically, he’s always solid.

Over the weekend, he gave himself a glimmer of hope at the US Senior Open by firing a Saturday 66 at Saucon Valley but in the end Padraig Harrington held his nerve.

Saucon Valley represented a bit of a homecoming for Furyk, but he was unable to capitalize on that advantage as he struggled on the greens on Sunday which resulted in him finishing T-25th after a 75.

“It’s just been kind of an up-and-down season, and this week was very indicative of how it’s been,” said Furyk, who memorably a shot a record-breaking 58 at the Travelers Championship on the PGA Tour.

In his press conference after the US Senior Open, a reporter took the opportunity to ask Stricker about what his confidence was like after “a very solid week” at the U.S. Open at The Country Club.

Well, Furyk shot rounds of 74-70 and missed the cut by one. Furyk may be 52 years old but that doesn’t mean missing the cut in a major by one stroke represents a solid week. Not by a long shot. The fire still burns.

Furyk replied: “The two weeks prior, the two months prior, nothing’s really been that good.

"So, I’m kind of still climbing up the mountain right now.

“When I miss a cut and you call it a solid week, I’ll be honest, it kind of pisses me off. Get that one on tape.”

This wasn't the end of the exchange. The reporter reminded him that he missed the cut by one in at times dreadful conditions against the world's best players.

He added: "I’ve been working hard on it [his game] and I feel like I’m making some headway.

“But definitely you can jump off the cliff and you get to the bottom a lot quicker than you can climb back up to the top, but right now I’m working on that climb.”