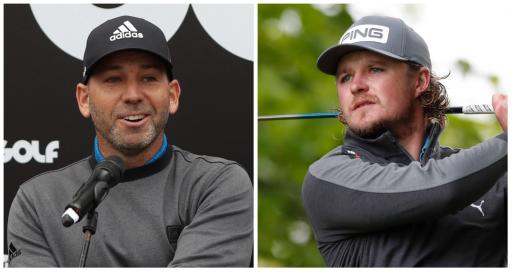 Pepperell, who has been outspoken in recent weeks and months about how LIV Golf has affected the golf world, decided to joke about Garcia’s infamous spitting incident way back in 2007.

The Spaniard was playing in the WGC-CA Championship at Doral and memorably, disgustingly decided to spit into the cup after missing a short putt on his way to a triple bogey at Doral.

Back then, Garcia described it as “no big deal”, claiming in an NBC interview that his phlegm did not go into the centre of the hole and even if it did, he would have wiped it off.

Well, Pepperell saw this post and decided to make light of the memorably Garcia moment, suggesting that Garcia has upped his game last week when playing the BMW International Open on the DP World Tour:

Sergio took it to new levels in Germany after discovering a new set of sanctions.. https://t.co/akScAf7xUF

A few weeks ago, the English pro gave a wide-ranging interview with The Times about his thoughts on professional golf as the PGA Tour and DP World Tour grapple with LIV Golf.

Garcia is a LIV Golf player and he has resigned from the PGA Tour. He is just one of several high-profile names that have signed lucrative deals to play in the Saudi-backed series.

Pepperell claimed he had heard rumours that Lee Westwood had suggested that the DP World Tour, formerly the European Tour, is “finished” thanks to the emergence of LIV Golf.

He told the paper: "If this happens and we look back and conclude that LIV Golf put the knife into the back of the European Tour, how are Westwood and [Ian] Poulter and Sergio and these guys going to feel about themselves knowing they have been complicit?

"I rooted for Sergio, the player. It’s hard to root for Sergio, the man. The way these guys speak, quite gleefully, about what they’ve done, well, it’s just disappointing."

Garcia was one of several DP World Tour players who have been fined for their involvement with LIV Golf.

Next page: Who is playing in the next LIV Golf event?