Padraig Harrington said it was nice to "finally get one over" his Ryder Cup nemesis Steve Stricker by claiming senior major on debut. 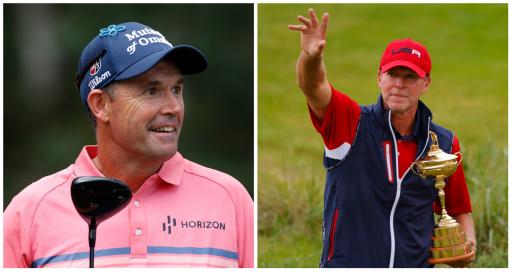 US Senior open champion Padraig Harrington joked he just wanted Steve Stricker “to give me a break” after he held off a charge from his Ryder Cup foe to claim his maiden senior major on debut.

Ireland’s Harrington had a six-shot lead heading into the back nine at Saucon Valley but Stricker, who captained the United States at the Ryder Cup at Whistling Straits last September, made him work hard for the victory by closing with a 65.

But Harrington, now 50 years old, held his nerve to claim the major by one stroke on his debut in the championship. His closing round of 1-over 72 saw him reach a total of 10-under par after four rounds.

Stricker battled health problems after he oversaw the dominant 19-9 Ryder Cup victory with a mystery illness that put him out of action for months.

He began the day eight strokes behind Harrington and made closing birdies at 17 and 18 to pile the pressure on Harrington.

Harrington dropped shots on 10 and 11. But the three-time major winner made an incredible 30-foot birdie putt on No. 15 and saved par in gutsy fashion on 17 to all but secure the victory.

He told the media: “It would have to be Steve Stricker chasing me down. Steve, give me a break, please.”

He added: “Yeah, Steve's a tough competitor. Certainly, he seems to have one on me over the years. So it's nice to get one back on him this time.”

Harrington said of his victory: “When you come to the Champions Tour, it's here to win tournaments and win the big tournaments, try and win the majors.

“I really appreciated the type of week it was. The USGA set up a fabulous course, much tougher than I had expected.

“I knew that would play into my hands, but it was really nice that -- really solid, tough golf course. Saucon Valley is excellent.

“Obviously, there's a lot of pressure on this type of style of golf course when you're leading. You don't want to make a mistake.

“Any time you're more than 20 feet away from the hole you're in trouble in some ways. So, it was definitely a tension-filled day.”

Next page: LIV Golf player hits out at claim from Brandel Chamblee