England's Matt Fitzpatrick holds off World No.1 Scottie Scheffler and Will Zalatoris to win his first major title at the US Open at Brookline. 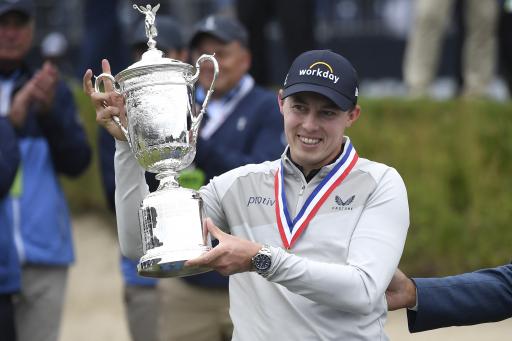 Matt Fitzpatrick has won his first major championship - and first PGA Tour title - with an incredible victory at the US Open at Brookline, also the scene of his US Amateur triumph in 2013.

Fitzpatrick, 27, carded a final-round 68 to finish 6-under par and one shot clear of playing partner Will Zalatoris and World No.1 Scottie Scheffler.

The Englishman now joins the great Jack Nicklaus as the only other player to win the US Open and US Amateur on the same golf course. Nicklaus achieved the feat when winning his second US Amateur in 1961 and his third of four US Open titles in 1972 at Pebble Beach.

Despite winning seven times on the DP World Tour prior to this week, Fitzpatrick is now officially a winner on the PGA Tour for the first time.

Fellow Englishman Danny Willett was the last player to make their maiden PGA Tour title a major, winning The Masters in 2016.

According to the record books, 13 of the last 17 US Open champions have now made it their first major win.

The win also marks a first major title for Fitzpatrick's caddie Billy Foster, who has also caddied for many of the world's best players such as Seve Ballesteros, Lee Westwood, Darren Clarke and Thomas Bjorn.

"It's incredible, it's unbelievable, it's 10 million times better than I thought I would feel," said Fitzpatrick.

"To see all the hard work pay off, it's special.

"It just felt like it was always meant to be here. I've had so many close shaves this year and just come up shy. I played well at US PGA and Billy said to just stick in and wait, it's going to happen, and for it to happen here, it just feels right."

Scheffler raced to the top of the leaderboard with four birdies on the front nine, in similar fashion to the third round, but he would let things slip with bogeys at 10 and 11 to hand the advantage to Fitzpatrick on the back nine.

The American holed a six-footer for birdie on 17 to pull within a shot of the Englishman going down the last, but he could only manage a par for a round of 67 - and he would come up just shy of a second major title and fifth PGA Tour win of the season.

Zalatoris started slowly with two early bogeys on the 2nd and 3rd but he hauled himself back into contention with three birdies in four holes from the 6th.

He was briefly back in a tie for the lead when Fitzpatrick bogeyed the 10th and 11th, but Fitzpatrick pulled ahead of those around him with a birdie bomb at 13 followed by another from 20 feet at the 15th.

Zalatoris sent a stunning iron shot into within six feet for birdie at the par-3 16th to join Scheffler in a tie for second but he could only make pars on the last two holes for a 69.

Fitzpatrick found trouble with his tee shot on 18 in the left fairway bunker but then sent a stunning short iron over the island lip and onto the green to see out a memorable US Open victory.

Japan's Hideki Matsuyama surged through the field with a superb round of 65 to finish in fourth on 3-under par.

Rory McIlroy had a weekend to forget by his own very high standards and the 2011 US Open champion could only manage a 69 to finish four shots back on 2-under par alongside Collin Morikawa, who posted a solid 66.

Jon Rahm was many people's favourite entering the final round at just one off the pace but the defending champion slumped to a round of 74 and he finished 1-over par for the tournament.

Brooks Koepka, a two-time winner of the US Open, finished well down the field on 12-over par, with 2020 US Open champion Bryson DeChambeau finishing a shot worse on 13-over par.

US OPEN FINAL ROUND LEADERBOARD