US Open: Jon Rahm has no regrets over 18th hole double-bogey in third round

Jon Rahm said he hit six good shots on the final hole in the third round of the US Open, despite making a double-bogey to fall one shot behind the leaders. 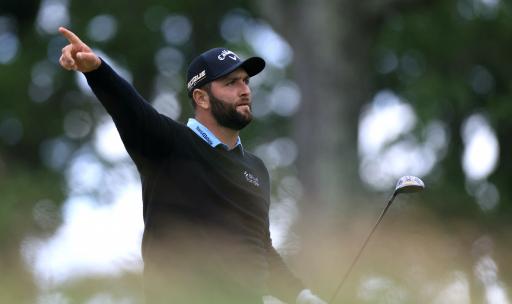 Defending US Open champion Jon Rahm was happy about the way he ended the third round of the US Open despite making a double-bogey six.

Rahm told the press after Saturday's brutal round that he made six good swings, showing no regret at his attempt to reach the green with his second shot out of the fairway bunker.

The Spaniard's tee shot rolled up the lip of the lefthand sand trap and dribbled back into the middle. It was in an inviting position and Rahm felt aiming for the putting surface with a 9-iron was the correct option.

He skulled his shot into the lip and then plugged his ball in the greenside bunker with his third shot. By making a six, he surrendered a one-shot lead and fell back to 3-under-par, one shot behind Will Zalatoris and Matt Fitzpatrick.

"I played good. It's a good round of golf. Obviously, I think a lot of people are just thinking about 18. The truth is, 18, it was six good shots. Unfortunately, it added up to six, but it was all good swings," Rahm said after his third-round 71.

Related: US Open: Will Zalatoris keeps up major championship form

"If anything, it was maybe a choice or a decision on the fairway bunker, but swings were good, so execution was proper. So I'm happy about that in that sense. A couple of the holes like that 3-wood on 17 or 14 or the driver on 12, it paid off, so it's just things that happen in golf.

"It was a little dark, and it was hard to see. After I hit the shot, I realized the ball was a little bit deeper in the sand than I could really truly see. But I think I got maybe - tried to be a little too perfect with the shot.

"I had a 9-iron in hand. That's plenty to get over that lip. Maybe I was trying to get too cute, looking for another birdie, where I could have just hit a 9-iron and hope it gets over the bunker and see what happens."

Rahm isn't just chasing Zalatoris and Fitzpatrick on Sunday, he is chasing history. He could become the first European player to win multiple US Open titles since Scotsman Alex Smith in 1910.

Even though he picked up his seventh PGA Tour win at the Mexico Open this season and achieved six top-10s, Rahm has not been scintillating, not his scintillating self that saw him accumulate 43 weeks at World No.1.

The 27-year-old has arguably struggled on the greens in 2022, being ranked 76th in strokes gained in putting. But on Saturday in Brookline, he was ranked fifth in this statistic so the penny may be dropping with the short stick.

Next Page: US Open: Rory McIlroy has "one of toughest days" in third round in Brookline