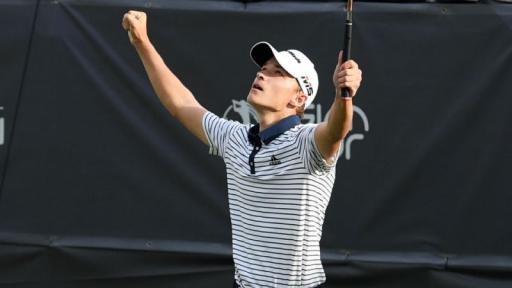 Rasmus Hojgaard became just the second youngest player ever to win a European Tour event on Sunday, when the 18-year-old picked up the Mauritius Open in just his fifth start on the European Tour.

Hojgaard was joined in the playoff by fellow rookie Antoine Rozner and Italian Renato Paratore, as the three players were level after four rounds, tied at 19-under-par at the Heritage Golf Club.

As the three played the 572-yard par-5 18th in the first playoff hole, Paratore found the water with his second shot, knocking him out to leave a two-horse race between Hojgaard and Rozner, who both birdied the hole.

At the second extra visit, Rozner produced a brilliant birdie putt to match Hojgaard once again, forcing the playoff to a third.

This time round, the young Dane, Hojgaard, who only turned professional at the start of the year, produced a magnificent second shot to leave a nine-foot putt for eagle, which he made no mistake in sinking.

"I can't put it into words. I'm looking forward to the next challenge."

Rasmus Hojgaard - What's in the bag?

NEXT PAGE: Cameron Smith hopes the crowd "absolutely gives it" to Patrick Reed at The Presidents Cup