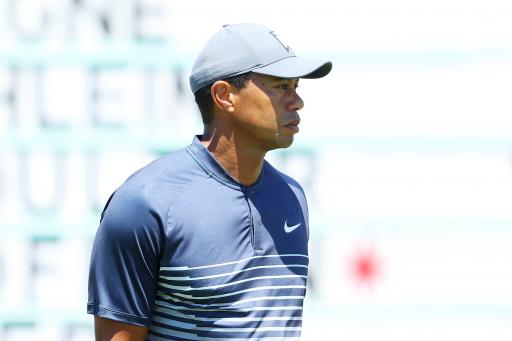 Tiger Woods made a calamitous triple-bogey seven at his first hole of the US Open at Shinnecock Hills.

Woods, making his first start in the US Open since 2015, appeared to get off to a solid start when sending a long iron down the middle of the fairway - but then things went horribly wrong from there.

The 14-time major champion sent his approach from 150 yards over the back of the green and then compounded the mistake when sending his chip shot off the other side of the green.

Woods took out the putter from there and hit it fat, with the ball rolling back and about 10 feet in front, and he went on to make a treble-bogey seven.

An interesting stat for downbeat Tiger fans out there, however, is he double-bogeyed the fist hole in three of the four rounds at the 2008 US Open, his last major victory.

When Tiger beats you to a f bomb drop pic.twitter.com/RrDGqT8u0y

Woods then went on to bogey the second hole before calming things down with pars on the next two holes and then an opening birdie of the day at the fifth. Woods is currently 3-over through five holes at the time of his article being published.

World number one Dustin Johnson, playing alongside Woods, made birdies at the fourth and fifth to start nicely at 2-under.

WATCH: MCILROY TAKES TWO HACKS TO GET OUT THE ROUGH

It proved to be a day of disastrous starts for a number of the world's best with Rory McIlroy playing his opening five holes in 6-over before going on to sign for a 10-over 80. McIlroy incredibly made three double bogeys on his first 10 holes.

Jordan Spieth, playing alongside McIlroy, also endured a nightmare opening day with a round of 78, with Phil Mickelson, making up the threeball, shooting 77.

WATCH: SPIETH HAS A SHOCKER AT THE 11TH

McIlroy, Spieth and Mickelson - which was considered as the star grouping of the morning wave - carded a combined 25-over par.

England's Ian Poulter posted the lowest round of the morning with a superb 1-under 69.