US Open: Jon Rahm golf ball STOLEN on 18 but he still makes birdie

Two kids take off with Jon Rahm's ball on day one at the US Open. 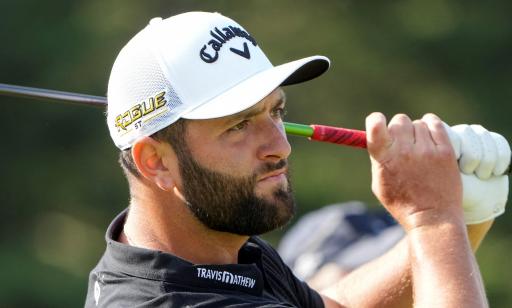 Two kids took off with Jon Rahm's golf ball on the 18th hole on day one of the US Open at Brookline - but incredibly, Rahm took his drop and still went on to make a birdie.

Rahm, who is looking to defend his US Open title at Brookline this week, sent his tee shot down the 18th into the left rough.

As the Spaniard was trudging down the fairway to go and find his ball, he saw a pair of kids run off with his Callaway ball.

Rahm took his free drop for having his ball stolen and then received another drop due to line of sight with the grandstand in his way.

The World No.2 then sent his approach shot into the heart of the green to 20 feet and then drained the putt to finish his round 1-under par.

"Somebody, I'm pretty sure I know who it was," said Rahm when he was asked who took his ball after the round.

"I recognized the two kids that were running the opposite way with a smile on their face.

"We knew exactly where it was. Off the tee I was comfortable. I was past all the trees. After the free relief, I had 135 yards to the pin, in an area where the rough wasn't that thick.

"I don't think they expected anybody to hit it there or be around there, so I was able to drop it in an area that was a little downgrain, and I wasn't in jeopardy of carrying the bunker. That wasn't really a concern."

Rahm finds himself just two shots off the pace as it stands in the early stages of round one.

It has not been the greatest start to the year for Rahm but he still has a win tucked under his belt following victory at the Mexico Open in early May.

Next Page: Phil Mickelson hits shot "down in Boris Johnson's hair" and then four-putts from 12 feet at US Open