Phil Mickelson gets a fantastic reception at the US Open - but he is off to a rough start at Brookline. 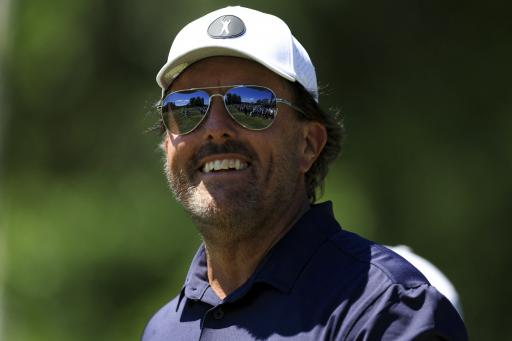 Despite being a six-time major champion, Mickelson, who became golf's oldest ever major champion when clinching the US PGA Championship in 2021, is still a US Open shy of completing golf's career grand slam.

Despite his involvement in the LIV Golf series, Phil Mickelson gets a good reception on first tee pic.twitter.com/LL6HMgCidb

That could all change at Brookline this week - or at least it could have done had Mickelson not played his first six holes in 5-over par.

Playing on his 52nd birthday, Mickelson opened with bogeys at the 1st, 3rd and 5th - a hole where Sky Sports Golf's on-course commentator Wayne 'Radar' Riley described the American's ball as being "down in Boris Johnson's hair".

"Down in Boris Johnson's hair"

Mickelson then compounded his mistakes by making a complete mess of the par-3 6th when taking four putts from inside of 15 feet leading to a double-bogey five.

Guess he isn’t used to playing in tournaments with cuts anymore pic.twitter.com/mZs1sV8yvF

That moved Mickelson to 5-over par for six holes.

He then calmed things down with pars at the 7th and 8th.

Mickelson rocked the sport earlier this year when comments about Saudi Arabia and the PGA Tour made to biographer Alan Shipnuck were made public.

In a February interview with the website The Fire Pit Collective, Mickelson said the Saudi government are “scary motherf*****s” who murdered Washington Post columnist Jamal Khashoggi.

He also said he was only entertainng the idea of being involved with a new Saudi-backed golf super league in order to use the money as "leverage" against the PGA Tour.

Mickelson took time away from the sport and then returned to confirm he would be competing in the inaugural LIV Golf Invitational London at Centurion Club, which took place in England last week.

He finished well down the field but still walked away from St Albans with $150,000 for his week's efforts.

Well, he has also reportedly been paid in the region of $200 million for signing up to play in LIV Golf events.

Next Page: Rory McIlroy gets off to fast start at the US Open