US Open: Justin Thomas drops F-BOMBS after not taking a drop from the drain

Should Justin Thomas have taken a drop from this drain in the middle of the 4th fairway? Sky Sports Golf commentators Ewen Murray and Paul McGinley are divided about it. 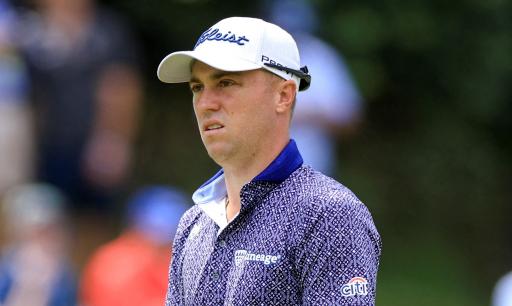 Justin Thomas' sheer honesty ultmately cost him a shot on the par-4 4th hole during the third round of the US Open at Brookline - and Sky Sports Golf commentators Paul McGinley and Ewen Murray were divided about the whole incident.

Thomas split the middle of the 4th fairway with his drive and he then trudged down the fairway to see his ball nestled on the right corner of a drain.

The two-time major champion stepped in and decided to play the shot without even bringing in a USGA rules official because he considered the shot was playable as it lied next to the drain.

However, JT quickly regretted being quite so honest after fatting his second shot into the bunker 50 yards short of the green.

WATCH WHAT HAPPENED HERE - AND READ MORE ABOUT THE DEBATE BELOW:

Who's taking a drop here?!

Justin Thomas was furious with where his ball came to rest in the fairway on the fourth hole pic.twitter.com/th6VU6KiJ5

"That's what p****s me off because so many other people would lie about being able to hit that, but it's just like I'm not going to hit it, like I'm just trying to be a good f****** person... f****** bulls***," ranted Thomas, who dropped one more F-bomb for good measure as he walked down to play his third shot from the sand.

McGinley then stepped in on the broadcast to say: "Okay, I think we need to apologise for that."

The Irishman then debated 'drain-gate' with co-commentator Murray.

McGinley considered Thomas did exactly the right thing to not take a drop from the drain in the fairway.

Murray, however, felt he should have taken full relief as it completely affected how he was playing the shot.

Related: Justin Thomas gets announced on the 1st tee at the US Open as 'Justin Thompson'

McGinley opened the batting: "The point he is making is you only get a drop if it's affecting your stance or the line of your swing, and because it wasn't going to affect not just his impact position but also his follow through, his point was 'I'm not really entitled to a drop here even though it is affecting my lie.'

"And his point was a lot of players would actually look for it, get a referee out and talk the referee into it, and he ended up having to play it, and it obviously messed with his head."

Murray then replied: "Well I'm surprised at that because it did affect the shot he had. He's in the middle of the fairway and he deserves a decent shot, but I thought he just left it there because the ball was on a right to left slope and it would have been easier to get the draw.

"He's not too chuffed about it."

McGinley came back in: "He was being incredibly honest there. A lot of players would have called over a referee and you know what, a lot of referees would have given him the benefit of the doubt there and say 'yes, it is going to affect your shot.' That's the point he was making to his caddie.

"He didn't call over a referee and he wanted to play with full integrity there by saying 'no, it's not going to affect my follow through'. Strictly by the rules of the game, which have to be followed, he's said 'I'm not entitled to a drop.' So credit there to Justin Thomas."

Murray, the long-time lead Sky Sports Golf commentator, disagreed: "I still think he was entitled to a drop because the way the ball was on a slope, that's a very flat piece of fairway.

"He tried to cut the tee shot to find that side of the fairway so he could find a way in to the pin for the second.

"A lot of people say you should get a drop from a divot mark and I don't think that's the case, but a drain.. and also around the drain would there be any concrete there?

McGinley said: "Yeah and that could well have been an argument he would have won over the referee to say 'look, there's probably some concrete underneath this here because I'm so close to it' and he may well have got a drop for that reason."

Murray replied: "Well the iron drain is sitting on something, and it's not sitting on what's underneath these fairways because they are heavily sanded, they are top dressed every second year or so, so there is something there either metal or concrete.

"I rather hope he gets down in two now."

Unfortunately Thomas did not get up and down from the front greenside bunker and he would make his first bogey of the day.

What do you make of JT's decision to not take relief from a drain in the middle of the fairway? Would you have taken a free drop or would you have just played it as it lied? Share your thoughts and comments over on the GolfMagic social media channels.