Justin Thomas saw the amusing side of being announced as Justin Thompson before the third round of the US Open. 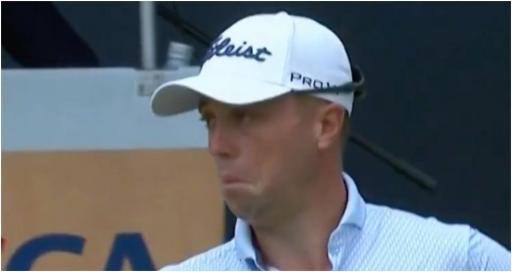 You only had one job. This is how Justin Thomas may have felt when he teed it up before Saturday's third round of the US Open.

Thomas, 29, was on the tee box at The Country Club at Brookline ready to make a charge on moving day when the announcer had a shocker.

This was an absolute howler from the USGA's announcer, who said: "Next on the tee...Justin Thompson". Ooft. That's not particularly great.

Related: Justin Thomas drops multiple F-BOMBS after not taking relief from a drain in the middle of the fairway

At least Thomas, the 2022 US PGA champion found it amusing. The look on his face was absolutely priceless. Perhaps it calmed the nerves.

To be fair to the announcer, maybe he just did not recognise Thomas because of the particularly striking red pants he was wearing.

Who is this guy?

Kudos to Justin Thompson with a great start with par on #1 at the US Open. Doppelgänger-@JustinThomas34 pic.twitter.com/xfGxwtMLAj

Never heard of Justin Thompson, but I hope @JustinThomas34 has a great round in the @usopengolf Come on, Mr. Announcer.

Did an official from @usopengolf just announce @JustinThomas34 as Justin Thompson on the first tee? Unreal. If he wins he should thank the R&A.

It did not appear to bother Thomas, though, because he striped his first tee shot right down the middle of the fairway.

He even looked like he was having a good chuckle to himself as he passed his 3-wood back to his caddie Jim "Bones" Mackay.

Thomas began his day at 1-over par for the championship looking for a big moving day at the third major of the year.

He was paired with Ireland's Seamus Power on a day where the scoring looked like it was going to be particularly brutal.

Thomas has wowed golf fans and analysts with some of his performances in tough scoring conditions this season.

At TPC Sawgrass he put on a clinic when the wind wreaked havoc at The Players. He was just as incredible at Southern Hills.

Next page: Dustin Johnson does have one small regret about LIV Golf