US Open R1: Rory McIlroy one off the early pace set by Adam Hadwin

Rory McIlroy continues to impress but it's Canada's Adam Hadwin out in front after 18 holes at Brookline. 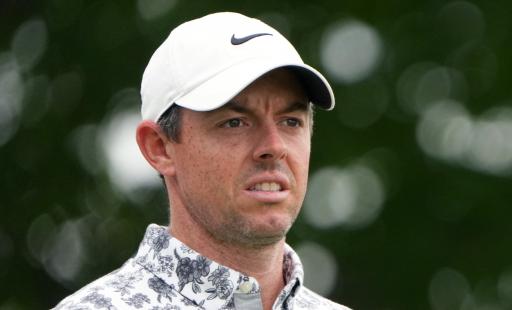 Rory McIlroy continued exactly where he left off after winning the RBC Canadian Open on Sunday by moving into early contention for the US Open.

McIlroy, bidding to win his second career US Open and first major title since 2014, carded a solid 3-under par 67 on a tough first day of scoring to lie just one shot behind Canada's Adam Hadwin at Brookline.

The Northern Irishman started on the 10th hole and went out in 2-under par following birdies at the tricky par-3 16th and par-4 18th.

McIlroy then made six pars in a row during a spell where he lost his rag somewhat in the bunker on the 5th hole.

The former World No.1 found an awkward lie atop the bunker at the short par-4 hole and he could only progress his ball into the bunker in front of him.

However, he recovered well and got up and down for par.

Watch: Rory McIlroy loses his cool in the bunker but goes on to make an incredible par at US Open

McIlroy then birdied the par-4 7th and par-5 8th but he would hand his only shot back to the course on his final hole, the par-4 9th, with a bogey-five.

Nevertheless despite the blip on his last hole, McIlroy is now a clear favourite with the bookmakers to see out a fifth career major title.

Hadwin, who has one PGA Tour title to his name coming at the 2017 Valspar Championship, is the man they all have to catch after 18 holes following a steady round of 4-under 66.

The 34-year-old Canadian has played in the US Open six times previously and his best finish is a tie for 39th.

Hadiwn has three top-10 finishes on the PGA Tour so far this year.

Should McIlroy go on to win, it would mark his 22nd victory on the PGA Tour and his first major since the 2014 US PGA Championship.

McIlroy won his first major championship at the 2011 US Open with a commanding eight-shot victory at Congressional.

In the last 60 years, no player has won the US Open the week after winning a PGA Tour event.

Can McIlroy do it? He has certainly made the best possible start.

Elsewhere, Dustin Johnson bounced back from his tie for eighth at the LIV Golf event last week with a solid 2-under 68 alongside English duo Matt Fitzpatrick and Justin Rose.

Jon Rahm started well in his US Open title defence with a round of 1-under par, a score that was matched by US PGA champion Justin Thomas.

Rahm is bidding to replicate the feat of Brooks Koepka in 2018 by going back-to-back in the US Open.

Curtis Strange also did that in 1989.

Next Page: Phil Mickelson should be REMOVED from the World Golf Hall of Fame, admits Brandel Chamblee