WATCH: MJ Daffue hits shot off the carpet in concession stand at US Open!

MJ Daffue had a day to remember on day two at the US Open. 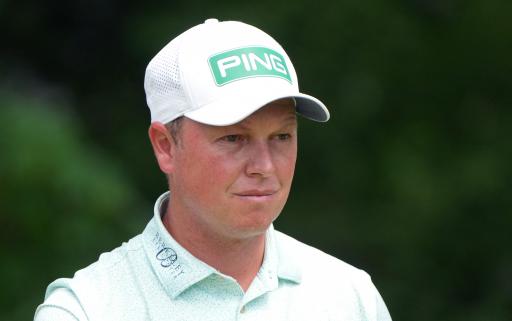 It's fair to say South Africa's MJ Daffue had one of his most memorable days ever on a golf course on day two at the US Open.

Daffue raced out the blocks at Brookline on Friday by playing his first seven holes in 3-under par.

That meant the little-known South African - who does not even have a Wikipedia page - had moved serenely into a three-shot lead on 6-under par.

Things sadly dipped quite badly for the 33-year-old thereafter as he returned in 5-over par to fall back into the pack on 1-under par heading into the weekend.

He even found time to visit the concession stand on the par-5 14th hole.

Instead of taking a drop, Daffue loved the lie that much that he decided to rip a fairway wood straight off the carpet to get his ball back into play.

Daffue was ranked outside the world's top 800 at the start of the year.

But after earning his PGA Tour card via the Korn Ferry Tour, Daffue has progressed into the top 300.

Daffue might not go on to do the unthinkable and win the US Open at odds of 1,000/1 this week, but he has certainly given himself every chance of recording his biggest result to date with a strong performance over the weekend.