Rory McIlroy put a dent in his chances of winning his first major title in eight years after making a damaging double-bogey in the second round of the US Open. 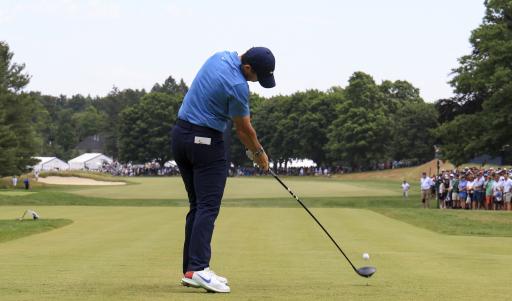 Rory McIlroy thrashed around like a club golfer on the par-4 3rd hole during his second round of the US Open, but he went on to save an incredible double-bogey.

The four-time major champion entered the second round on 3-under and one shot behind leader Callum Tarren. Off the 3rd tee box, he found the middle of the fairway at The Country Club in Brookline.

But McIlroy pushed his approach so far right that it missed the large greenside bunker and into the deep rough. He weighed up his options when he got to his ball.

The former US Open champion, faced with an impossible shot, moved his ball roughly a yard in the rough with his third shot and his fourth shot was very similar.

He was looking straight down the barrel of the gun at this point and he had damage limitation on his mind. He finally pitched out with his fifth shot to roughly 22 feet.

We have ALL been there

Rory McIlroy was hacking at his ball in the long grass for some time, but ends up with a double-bogey thanks to a stunning 20-footer pic.twitter.com/MjZzDfB76Q

McIlroy was third in strokes gained in putting in the first round and he showed more amazing form with the short stick on Friday. He boxed his long putt for an incredible double-bogey.

In what could've been a complete disaster, a six was a tolerable score for McIlroy and his caddie Harry Diamond to work with. He fell back to 1-under-par and was still just three shots behind Tarren at the time.

He recovered with birdies on the 5th and 8th holes to stay in contention on 2-under-par. As the day grew older in Brookline, the leaderboard become crowded.

World No.1 Scottie Scheffler carded a 67 to reach 3-under earlier in the day, while Collin Morikawa hit the top of the leaderboard on Friday on 5-under.

Defending champion Jon Rahm made a fantastic eagle on the par-5 14th hole to also put himself in the mix in Massachusetts.

Next Page: This putter shocked me! Evnroll Zero putter review