Bryson DeChambeau underwent surgery on his fractured left hand in April as he tries to ready himself for the PGA Championship. 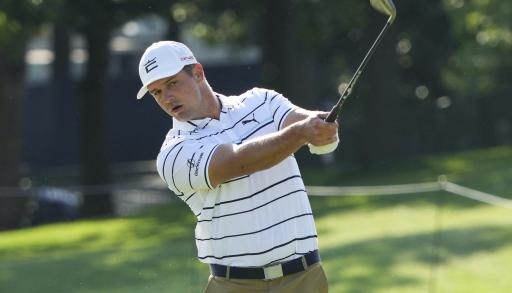 Bryson DeChambeau's left hand "held up nicely" on the second practice day of the PGA Championship as he looks to compete in the second major of the year.

DeChambeau posted a couple of swing videos at Southern Hills on his Instagram story on Tuesday, attaching a comment of "not too slow" to one of the videos.

You could assume that DeChambeau will compete in the tournament at this stage, which seems incredible considering he received surgery on a broken wrist on April 14.

He took his stitches out of his hand on April 29 and he painfully gripped a club the next day. On May 1, DeChambeau posted a video of himself chipping balls into a net under the advice of his doctor.

On Monday, he tweeted, "On my way to Southern Hills CC. Going to test how I am feeling over these next couple days and decide on whether to compete. Looking forward to being in Tulsa."

The 28-year-old has only played five times on the PGA Tour this season and he has missed three cuts and failed to make a top-10.

After winning twice and earning $7,426,415 in the 2021 season, it has been a very disappointing season for DeChambeau who simply hasn't been able to get going.

DeChambeau certainly wasn't himself at The Masters in April. He followed up a 76 in round one with an 80 in round two.

Next Page: Tiger Woods, Rory McIlroy and Jordan Spieth in SAME GROUP at US PGA