Tiger Woods has been practising at Southern Hills ahead of the PGA Championship and he has been sporting the famous FJ brand on his feet. 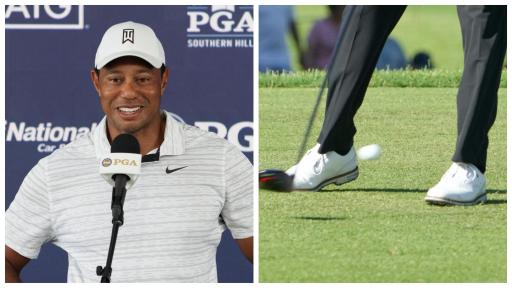 Just as he did at The Masters, Tiger Woods chose to wear a fresh pair of FootJoy shoes during his practice round at the PGA Championship on Tuesday.

Although Woods has been lucratively involved with Nike since 1996 when he joined the PGA Tour, he decided not to wear one of their popular footwear models at Southern Hills.

The 46-year-old also wore black and white editions of FootJoy's Premiere Series at Augusta National in April. Perhaps these shoes give him more comfort when walking on his injured right leg?

"Like golf fans around the world, we are delighted to see Tiger back on the course," Nike said in a statement last month.

Related: Tiger Woods reveals why he hasn't reached out to Phil Mickelson

"He is an incredible athlete, and it is phenomenal to see him returning to the game at this level. His story continues to transcend sport and inspire us all. As he continues his return, we will work with him to meet his new needs."

Woods, a four-time winner of the PGA Championship, told the press he believes he can win his 16th major championship this week on Tuesday, words that have left golf fans licking their lips.

He has been drawn in a marquee group with Rory McIlroy and Jordan Spieth in the first round on Thursday. Between the trio, they have won 22 major championships and 115 PGA Tour events.

Woods' fourth PGA Championship victory came at this very venue in Tulsa, Oklahoma in 2007 and he will be hoping to edge closer to Jack Nicklaus' record of 18 major championships.

It will be interesting to see how Woods fairs on a tougher course with juicier rough than Augusta National. After he finished 47th in the first major of the year, he looked visibly fatigued.

Next Page: Tiger Woods, Jordan Spieth and Rory McIlroy in same group at US PGA