Did John Daly just fire a cheap shot at Tiger Woods in the PGA Championship?

John Daly believes Tiger Woods would have done much better at the PGA Championship at Southern Hills had he decided to use a golf cart. 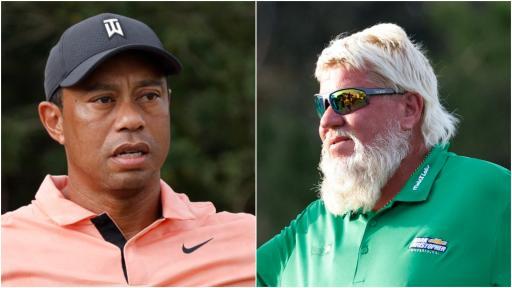 John Daly has raised eyebrows with his latest quote on Tiger Woods at the PGA Championship last week, citing the 15-time major champion would have featured "on the leaderboard" had he used a golf cart at Southern Hills.

For reference as to why there is an element of sarcasm about Daly's latest comment, cast your mind back to the 2019 PGA Championship when Woods took aim at Daly for using a golf cart at Bethpage Black.

It was latter revealed to Woods that Daly was using a golf cart as a result of health reasons, and Woods later apologised to Daly.

Woods and Daly both missed the cut at the 2019 PGA Championship.

Related: John Daly discusses his BEEF with Tiger Woods and what he text him after his car crash

Fast forward to the weekend at the 2022 PGA Championship, and it was Daly hitting one back over the net to Woods.

"I guarantee you that if Tiger used a cart this week, he'd be on the leaderboard," Daly told Golf.com.

Perhaps Daly is being sincere here, but perhaps he is not. Who knows exactly, but no doubt Woods will have stifled a laugh at the comment.

Woods has made it clear he has no intentions of using a golf cart in an official tournament on the PGA Tour or in the majors. He once said:

In order to use a golf cart in an official tournament on the PGA Tour, you have to apply for a special exemption.

Daly once again used a golf cart at the PGA Championship at Southern Hills last week but he would go on to miss the cut despite making a solid start on his opening nine in the first round.

Woods, who walked the course, made the cut but would ultimately go on to withdraw from the tournament after struggling to a PGA career-high 79 in his third round. It marked his third-worst round of his major career, and his fifth-worst on the PGA Tour.

He once carded a 85 in the third round of the 2015 Memorial, which is his highest one-round score on the PGA Tour.

In the majors, Woods once posted an 81 in brutal third round conditions at the 2002 Open Championship at Muirfield.

After his withdrawal at the PGA Championship, it now remains to be seen whether Woods will compete in the US Open in three weeks time at Brookline.

Woods has made it no secret just how excited he is to compete in the 150th Open Championship at his favourite golf course in the world, the Old Course at St Andrews, from July 14-17.

Daly teamed up with his son John Daly II to win the PNC Championship at Albany in the Bahamas at the end of 2021, finishing two shots ahead of Woods and his son Charlie Woods.

That week, Woods did use a golf cart as it marked his first competitive tournament since his horror car crash in Los Angeles in February 2021.

Next Page: No Rory McIlroy for the LIV Golf opener, sorry Greg Norman...