This Tiger Woods fan was turned into a social media superstar overnight for this moment at the US PGA. 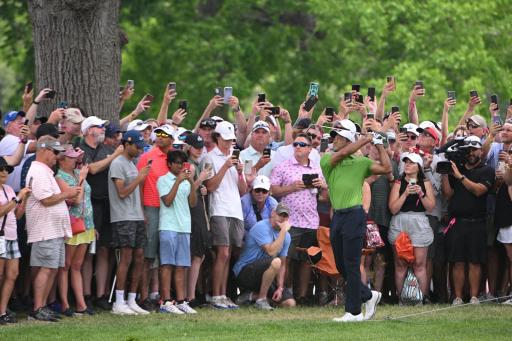 Cast your mind back to the second round of the US PGA Championship at Southern Hills and you might remember this moment involving a Tiger Woods fan.

Woods was grinding hard to try and make his second cut in a row at a major on Friday afternoon.

Of course, there were thousands of fans following the 46-year-old big cat. Who knows how long he will play golf for?

So when you are presented with such an opportunity you may as well make the most of it and grab your phone for a picture or video.

It's quite a sad indictment on our society that we are so reliant on our phones instead of just enjoying the moment. But there we are.

Golf fans were also enraged when the cameras decided to film one of Woods' birdie putts...through someone else's mobile phone.

One moment went viral. The fan involved has since been immortalised as "The Michelob Guy".

Joy is living in the moment. Take it from @TheMichUltraGuy...Drop a if you agree. pic.twitter.com/VHIcRD3Siq

We found #TheMichelobGuy. As you can imagine, Mark was hard to reach. He proved it’s only worth it if you enjoy it, so we immortalized him with some merch. Grab a tee and rock it at the next golf event for a chance to win some free ULTRA. pic.twitter.com/bfZRo0aQ1w

Whilst several golf fans crammed behind Woods like packed sardines in a crushed tin box with their phones out, one man just watched.

His name is Mike and the moment went bananas on social media. It was a pretty cool moment of good press for Michelob Ultra.

They needed it, after the price of their beer ($18!) was absolutely slammed (including by eventual winner Justin Thomas) on social media.

Mike didn't seem to have a problem paying that much for his beer that he was pictured clutching behind Woods.

Credit where credit is due, the team at Michelob Ultra made use of this moment perfectly.

In an epic advert, they tagged it with the lines: "Some legends play in the moment. Some live in it."

Now they have tracked him down and Mike said they have offered to give him "copious amounts" of their beer.

They've also dropped some merchandise in his honour. Good for Mike.