Phil Mickelson shares the lead with Louis Oosthuizen at the halfway stage of the PGA Championship, which may have caught some players by surprise. 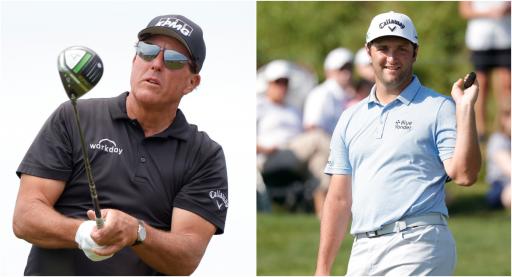 Phil Mickelson remembered some of his best golf from years gone by to shoot a 3-under-par 69 on day two of the PGA Championship at Kiawah Island.

The 50-year-old, who is looking to become the oldest major champion in history, was 2-over-par on his front nine on Friday but he made five birdies on the back nine to finish with a solid score of 5-under-par for the tournament, which was only matched by Louis Oosthuizen.

It was Mickelson's score over his final nine holes that caught Jon Rahm by surprise and he admitted that it gave him hope that he could do the same in his second round.

"Hey, Phil shot 4-under on the back nine, so anything is possible," said Rahm.

The PGA Tour posted this quote from the World No. 3 on their Twitter account and Mickelson wasted no time in replying and having his say on the matter.

As the PGA Tour tweeted the quote with the caption "Don't poke the bear", the five-time major champion replied simply with "Too late."

I think it is fair to say that Rahm was not being derogatory of the experienced lefty's golf game, as it is clear to see he is still capable of producing fine performances.

Golf fans on social media enjoyed Mickelson's response and left their comments too:

"Let's go Phil! Show these young boys who's the boss!" one fan said.

"You looked great out there today. Approach shots were focused!" one fan commented.

"Lets go Phil! Hoping you beat Jon by 1 in the end to win," another fan said.

"School is in session young pups!" another fan commented.

"Go all out Phil and win win win," one fan said.

Rahm was soon to discover how difficult the back nine was playing on the Ocean Course on day two. Although the Spaniard birdied the 10th and 11th holes, he made a double-bogey on the 17th hole and a bogey on the 18th hole to finish on 3-over-par for the tournament.