The conditions were extremely difficult on the Ocean Course at Kiawah Island this week and a host of big names missed the cut. 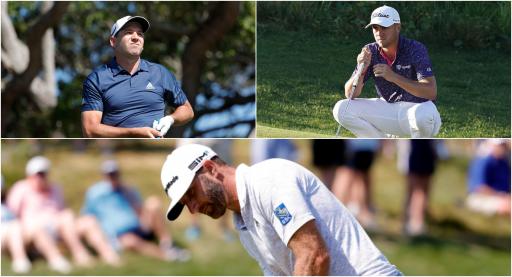 Dustin Johnson, Justin Thomas and Sergio Garcia were amongst a list of big names to miss the cut at the PGA Championship this week.

The Ocean Course at Kiawah Island is the longest golf course in major championship history and it has picked off a number of major champions and some of the PGA Tour's best players.

World No. 1 Johnson opened his week on Thursday with a 4-over-par 76. The big-hitting American, who hasn't finished in the top 10 since February, made two double bogeys in his opening round.

Johnson played slightly better on Friday but his score of 74 meant that he finished on 6-over-par for the tournament, which was one shot away from the cut. Despite making an eagle at the par-5 7th hole, he made his third double-bogey of the week at the par-3 14th hole.

2017 PGA Champion Thomas missed the cut at the tournament for the first time in his career on Friday. He needed to make a birdie on the final hole to reach 5-over-par for the week, but he could only manage a par.

The damage had already been done for the World No. 2 as he made four bogeys and a double-bogey in his second round, on what was an attritional afternoon in South Carolina.

Unfortunately, much like his two fellow competitors, Garcia finished one shot short of the cut mark as well. A disappointing round of 77 on Thursday had put the 2017 Masters champion on the brink of missing the weekend.

The Spaniard played far better in his second round, but he agonisingly bogeyed the 18th hole to shoot a 1-over-par 73 to finish on 6-over-par for the week.

Marc Leishman, Charl Schwartzel and Adam Scott all missed out on the weekend too, while Tommy Fleetwood and Xander Schauffele finished on 7-over-par and 6-over-par respectively after two rounds.