Erik van Rooyen looked as though he was safely making the cut heading into his back nine on Friday at Kiawah Island, but a late collapse put a stop to this. 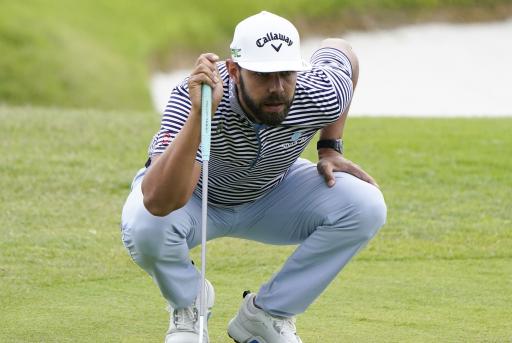 Erik van Rooyen endured a torrid last fives holes at the PGA Championship on Friday and his anger spilt over on the 17th tee box.

The talented South African sent his tee shot on the treacherous 198-yard par-3 towards the right edge of the green, which was dicing with the danger of the water.

His ball couldn't hang on, falling into the hazard and this led to a triple-bogey. Van Rooyen's emotions got the better of him as he took two large swipes with his club at one of the tee markers on the tee box.

The 31-year-old took such a violent swing at the tee marker that Matt Wallace's caddie, Gareth Lord, had to take a step back to avoid being hit by the object.

Van Rooyen's frustration may not have been aimed at that shot in particular, as he was on a poor run on the back nine which saw him miss the cut from a previously inconceivable position.

Although the one-time European Tour winner had made four bogeys in his first nine holes, he was 2-over-par for the tournament with five holes remaining, which was safely in the cut line and with an outside chance of contention.

But van Rooyen met trouble on the par-3 14th hole where he made a bogey and he followed this with a double bogey on the 15th hole. Another bogey followed on the 16th hole and his struggles on the par-3 17th meant that he had played his final five holes in 7-over-par.

The South African had missed the cut on 9-over-par out of nowhere, and it is fair to say that golf fans on social media made note of van Rooyen's antics.

After watching 26 straight hours of golf, I did not expect Erik Van Rooyen to give us the moment of the week so far.

Erik Van Rooyen with one of the best rages I’ve ever seen and that’s saying a lot considering I’ve caddied for @Steve_Flesch a few times.