Rory McIlroy and Brooks Koepka were paired together for the first two rounds of the PGA Championship alongside Justin Thomas. 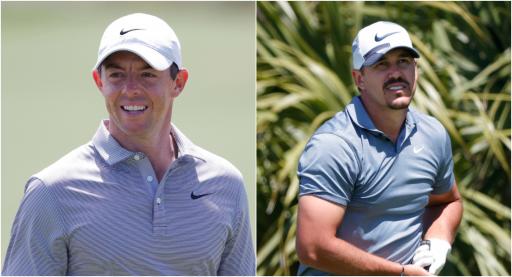 Rory McIlroy and Brooks Koepka have won a combined four PGA Championships between them and were paired together with fellow PGA champion Justin Thomas for the first two rounds at Kiawah Island.

However, McIlroy and Koepka took centre-stage in a video that has gone viral on social media as they walked across a green on the Ocean Course.

They didn't just walk though, they strolled side by side in a perfectly synchronised fashion, swaying their arms and moving their legs in effortless harmony on the way to their balls.

What made the video even more surreal was the way the multiple-major winners swayed their putters perfectly synchronised as well. The video also has some music put over the top too, to complete the viral masterpiece.

Golf fans reacted to the post on social media:

"Brooks did this on purpose let’s be honest," one fan commented.

"This is amazing," another fan said.

"Because they both copy Tiger," one fan said.

Unfortunately for McIlroy, it was another opening round at a major championship to forget as he shot a 3-over-par 75 and finished eight shots behind the overnight leader Corey Conners.

McIlroy hit his opening tee shot of the week into the water on the 10th hole, which was his first hole, and he made six bogeys on a disappointing day for the 32-year-old.

On the contrary, Koepka puts his injury worries aside and shot a solid score of 3-under-par to sit just two behind Conners after round one. Despite making a double-bogey on his first hole, he made six birdies on his way to a 69.