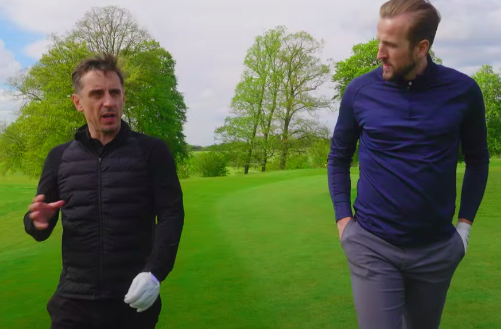 Harry Kane joined Gary Neville for a game of golf on the Sky Sports pundit's latest episode of The Overlap, which you can find on YouTube.

After speculation about his future emerged recently and with Kane reiterating his desire to leave Tottenham, he has been linked with a number of clubs such as Manchester United, Manchester City and Chelsea.

When talking about other players in the Premier League, Kane didn't hesitate in saying which players he would like to play with.

"When I watch De Bruyne play, he is a special player. Some of the balls I watch him put in for City are just a striker's dream if I'm honest," said Kane.

"He is an outstanding player year in and year out, with the ball, off the ball and pressing. His delivery is as good as I've ever seen."

Kane has been an incredible player for the North London club, scoring 220 goals in 335 games and he also is approaching Alan Shearer's Premier League record of 260 goals.

Neville, formerly of Manchester United, discussed a number of different topics with Kane, such as his time with Tottenham, England and his future.

"People might look at it and say 'he needs trophies', but I still feel like I have another career to play, I've got another seven or eight years.

"I'm not rushing anything and I'm not desperate to do anything. But I want to be the best version of me and I feel like I have so much more to give and I can be even better than what I have been."

Not only has the 27-year-old become one of the best strikers in world football, but he has also excelled at golf in his spare time. He revealed to Neville at the beginning of their round that he has a handicap of 2.

Kane backed up his handicap as he hit a superb first tee shot against Neville, who has a handicap of 12, and he managed to make a birdie.

NEXT PAGE: WORLD HANDICAP SYSTEM UNDER INTENSE SCRUTINY WITH NEARLY 2,000 EMAILS A WEEK