Erik van Rooyen nearly wiped out Matt Wallace's caddie Gareth Lord when taking his anger out on a tee marker... 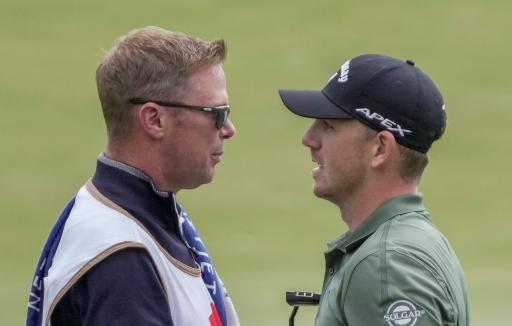 Matt Wallace's caddie Gareth Lord was seen snubbing Erik van Rooyen's offer of a handshake on the 18th green in round two at the US PGA Championship last week.

Lord's rejection was a result of nearly being struck in the face with a tee marker on the par-3 17th hole after van Rooyen lost the plot on the tee box when sending his tee shot into the water.

South Africa's van Rooyen ended up shooting a second-round 81 to miss the halfway cut, while Wallace made the cut and went on to finish tied 55th.

In case you missed van Rooyen smash up the tee marker, here's the video below:

Erik Van Rooyen finds the water then decides to obliterate a tee marker, losing a club head in the process. pic.twitter.com/xRiizg0wl1

Now watch Lord's reaction to a handshake on the 18th in the video below:

Wallace's caddie just full snub for EVR (rightfully so) for almost getting decapitated by a tee marker. pic.twitter.com/nU0DvW7duu

Although the one-time European Tour winner had made four bogeys in his first nine holes, he was 2-over-par for the tournament with five holes remaining, which was safely in the cut line and with an outside chance of remaining in contention.

But van Rooyen met trouble on the par-3 14th hole where he made a bogey and he followed this with a double bogey on the 15th hole.

Another bogey followed on the 16th hole and his struggles on the par-3 17th meant that he had played his final five holes in 7-over-par en route to packing his bags home.