Justin Thomas on BEST BOGEY of his life at US PGA: "I cold shanked it"

Justin Thomas must've thought his day was done on Sunday at Southern Hills when he shanked his tee shot on the par-3 6th hole. 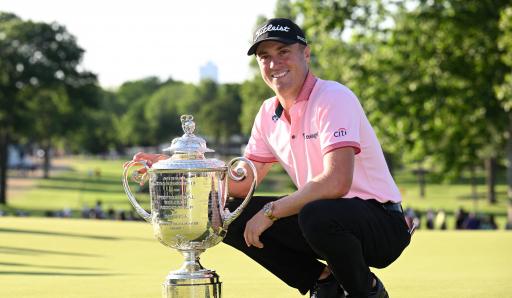 Justin Thomas made two bogeys in the final round of the US PGA Championship on Sunday, which makes his second victory at the event even more spectacular.

Like many of us mere mortal amateurs have done in the past, Thomas shanked his tee shot on this 218-yard hole. His shot only went 108 yards and he still had 121 yards to reach the green.

As his caddie Jim "Bones" Mackay explained after the round, his man was lucky not to find the water hazard on that side of the hole. His second shot clattered a tree and finished in a bunker, still with 108 yards to the hole.

The 29-year-old hit a miraculous sand shot to 18 feet from the pin and somehow, he saved a bogey which could've easily been a double or a triple.

Related: Justin Thomas: What's in the bag of the 2022 US PGA champion?

Don’t let anybody tell you you can’t achieve something. I stone cold shanked a 5iron on the final round of the @PGAChampionship, and went on to win the same day. Hitting your 3rd shot on a par 3 from 105 yards out without penalty strokes is humbling. Anything is possible

"I just cold shanked it. I don’t really know how else to say it. It was the best bogey I’ve ever made in my life, that’s for sure," the two-time US PGA champion said.

"I’ve never won a tournament shanking a ball on Sunday, so that was a first, and man, I would really like it to be a last," he told CBS after his 15th PGA Tour win.

After this fortunate break, Thomas crept up the leaderboard with birdies on the 9th, 11th and 12th holes. This took him to 4-under-par and he added a crucial birdie at the 17th hole which gave him the clubhouse lead and a 67 on the day.

Mito Pereira agonisingly double-bogeyed the last hole to miss out on a playoff. Thomas was joined by Zalatoris and he beat his fellow American after three holes.

Mackay described Thomas' effort on the 6th hole at Southern Hills as a "shanky-barkie-sandy." That is certainly one way of describing it.