Justin Thomas described Tiger Woods' comeback from his serious injuries to The Masters and the US PGA Championship as "beyond absurd." 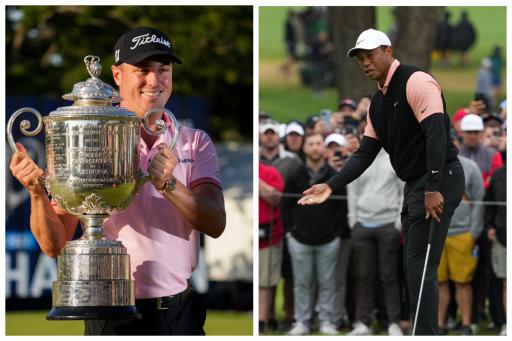 New two-time US PGA champion Justin Thomas described Tiger Woods as a "freak of nature" despite his withdrawal from the tournament at the weekend.

Following his second major victory at Southern Hills, Thomas referred to Woods making the cut as a victory in itself considering his serious car accident in February 2021.

Woods valiantly made the cut with rounds of 74 and 69 in Tulsa but after his third-round 79 and visibly struggling with his right leg, he had no other choice but to withdraw.

Thomas visited the 46-year-old during his rehabilitation and recovery after his surgery at his home in Florida and emphasised his comeback even further, referring to the extent of his injuries.

"I wouldn't say how tough it was to see him struggle. I mean, he made the cut in his second major in a row, what, a year and a half after being in a gruesome car accident, (with a) broken leg?" Thomas said after his playoff win against Will Zalatoris.

Related: Justin Thomas on BEST BOGEY of his life at US PGA: "I cold shanked it"

"I don't think you guys understand how unbelievable that is. He's a freak of nature. It's mind-blowing the things that he can do with his mind.

"I didn't play during his prime, but from the times I've been out here - him winning the Masters in 2019 and winning the Tour Championship, him making the cut these last two tournaments - for how some of the conditions he was in last year, it's absurd, like beyond absurd."

After finishing 47th at The Masters in April, Woods told us that he would play at The 150th Open Championship at St. Andrews in July.

Footage of the 15-time major champion almost buckling to the floor at Southern Hills was difficult to watch and golf fans hope his appearance at the US PGA hasn't taken its toll.

Despite his disappointing withdrawal and being close friends with Thomas, Woods didn't hesitate to take a comical jab at his fellow multiple US PGA champion.

"I talked to him a little last night and asked how he was feeling. And he just said he was feeling terrible because my name kept dropping on the leaderboard," Thomas added.