Justin Thomas overtook Rory McIlroy on Friday at Southern Hills, walking in a birdie putt on his last hole to reach 6-under-par. 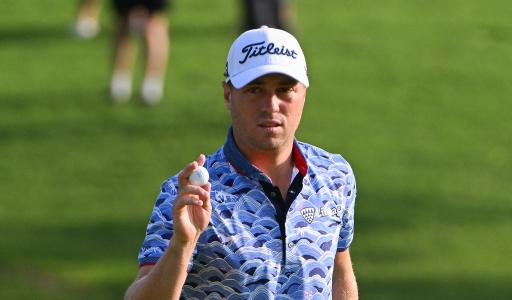 Justin Thomas equalled his lowest-ever 36-hole total at a major championship on Friday, carding a 67 to lead the PGA Championship by one shot.

Thomas played impressively in testing conditions in Tulsa. The former PGA champion made four birdies and one bogey to score his second 67 of the week.

His total of 134 after 36 holes levels his best-ever mark at a major which he previously set at the PGA Championship in 2018. He went on to finish tied sixth.

The 29-year-old American hasn't won on the PGA Tour since The Players Championship in March 2021. Since his 15th win on the circuit, he has finished in the top-five seven times.

When Thomas rolled in his final putt on the 9th hole on a blustery day at Southern Hills, 18-hole leader McIlroy was yet to tee off for his second round alongside Tiger Woods and Jordan Spieth.

"The greens are soft and receptive enough that if you land it on the green it is not going to get too far away from you," Thomas told Sky Sports after his round.

"I enjoyed it a lot. It brings out a good part of my game and I am comfortable with it. Playing well definitely helps, I don’t really worry about my golf swing or mechanics.

"I am just stepping into each shot and trying to start the ball on a proper line and get it to come down in a certain area and hit a certain trajectory and hopefully it ends out as a 67 like today.

"I really wanted to at least have the lead when I finished. You never know what is going to happen, selfishly I hope these boys get a little bit of wind for what we dealt with this morning."

Will Zalatoris and Tom Hoge were in second place overnight on 4-under-par, one shot behind McIlroy. They also hadn't started their second rounds when Thomas reached the clubhouse.

Next Page: Greg Norman: "Who is suppressing women's golf, quite honestly?!"