...but DJ goes on to make birdie and JT makes par! 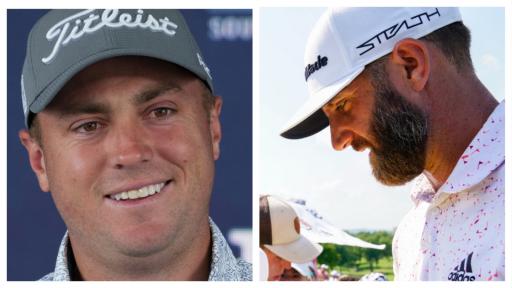 Justin Thomas was caught mocking playing partner Dustin Johnson for hitting a 9-wood on the par-3 8th during the second round of the PGA Championship at Southern Hills.

Thomas, who went first, sent a long iron into the heart of the green. Johnson then followed with his 9-wood and found the back fringe.

As the pair trudged off the tee box with Patrick Cantlay, JT was seen smiling and looking over to the crowd counting nine on his fingers as Johnson walked behind him.

But as it turned out, Johnson rolled home the putt for birdie and Thomas walked off with par.

We would say DJ was the last one laughing but unfortunately for him he will be missing the halfway cut on 6-over-par.

Thomas played superbly in the breeze on day two, finding 16 of 18 greens in regulation.

He went on to card a stunning 3-under 67 to move to 6-under par and one shot clear of Rory McIlroy, who tees off later this evening at the time of this report.

Justin Thomas is among Friday’s early starters as he attempts to chase down McIlroy pic.twitter.com/zJ2NyIXcEJ

Johnson can at least get back to spend some more time with his new wife Paulina Gretzky after the pair recently tied the knot.

Next Page: Paulina Gretzky and Dustin Johnson share incredible wedding video, as DJ gets emotional during the wedding vows