Cameron Smith hit his tee shot well right on the 2nd hole at Southern Hills and it, unfortunately, hit Aaron Wise on the head on the fly. 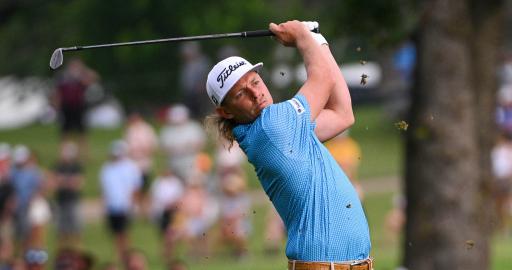 Cameron Smith accidentally hit fellow PGA Tour pro Aaron Wise on the head with an errant tee shot during the second round of the PGA Championship.

Smith hit his tee shot on the 2nd hole and he sliced it a long way right of the fairway. His ball was heading for the 7th hole.

The Australian and other members of his group shouted 'FORE', but when Smith got down to his ball, the commentary team in Tulsa revealed what happened.

Smith's ball hit Wise flush on the head without bouncing. According to the commentary team, Wise brushed it off and seemed ok while he was eyeing up his next shot with his yardage book.

Related: Greg Norman: "Who is suppressing women's golf, quite honestly?!"

Cam Smith’s tee shot on the 2nd hole hit Aaron Wise in the head on the fly. Here’s ESPN+ Featured groups coverage talking about it pic.twitter.com/TYeLjxV11J

@WiseGuyTracker, a Twitter account dedicated to the 25-year-old, posted some images on social media of Wise kneeling down and holding his head next to his caddie.

Luckily, it appears that Wise is ok and continues to play at the PGA Championship. @WiseGuyTracker tweeted that the one-time PGA Tour winner seemed physically well after the accident.

There is no footage as of yet of the ball hitting Wise, however, the footage above shows the drive that Smith hit which caused the collision.

Aaron Wise was hit in the head by an errant tee shot from Cameron Smith on the par-4 7th hole.

Wise was able to finish out his final three holes and complete his round. pic.twitter.com/9guegRQVxR

Aaron Wise is holding an ice pack to his head post-round after taking a Cameron Smith tee shot to the head on the fly pic.twitter.com/aoSL9u0OoE

At this stage, the 2022 Players Champion was 3-under-par for the tournament and three shots behind the new second-round leader Justin Thomas.

Next Page: Phil Mickelson's mum: "Not too many people recognise him"