Is Rory McIlroy's major swagger back? These crazy stats suggest so...

Can Rory McIlroy get that elusive fifth major this week at the PGA Championship at Southern Hills? 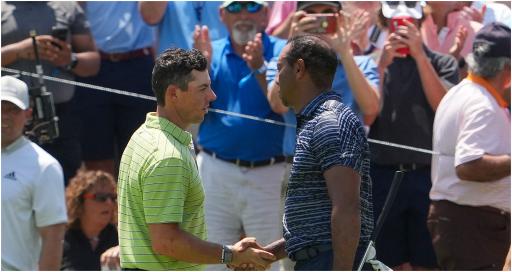 Disclaimer: This article was written before Rory McIlroy pegged it up for his second round at the 2022 PGA Championship at Southern Hills.

When McIlroy held the clubhouse lead after 18 holes, he admitted it was nice to "finally" start a major well for a change.

It's a topic often discussed, so much so thatt the 33-year-old Northern Irishman may be sick to the back teeth of fielding questions about it.

Majors. Particularly, his form when it come to the big ones. He could be forgiven for thinking there's a hex on him.

No matter what he does or tries, the first round always appears to be a struggle. But there are some pretty revealing stats about McIlroy after Round 1.

Looks like this will be the first time Rory McIlroy has led or co-led following a round in a major since his win at the 2014 PGA. From 2010-14, he did that 17 different times.

5th round of Rory's major career not recording a score on any hole worse than 4 https://t.co/VyQCuxb34O

Rory McIlroy is 2nd in scoring average and cumulative score to par in rounds 2-4 of majors since his last win, the 2014 PGA. Trails only Koepka.

Rory McIlroy: 65, his lowest opening round score in a major since the 2011 U.S. Open at Congressional.

McIlroy entered the week at a combined 35-over par in the first round of majors since 2015.

Compared to the rest of the week, he has been 68-under par.

His first round at Southern Hills Country Club was his best opening round of a major championship in nearly 11 years.

This was also the first time McIlroy had led after any major championship round since his victory at the PGA Championship in 2014 at Valhalla.

Moreover, this was also the fifth time McIlroy has led or co-led after round one.

Did playing with Tiger Woods help him out?

McIlroy's 65 tied the second-lowest score recorded by a player when paired with Tiger Woods in a major.

What Rory McIlroy has said about his form...

Next page: Scottie Scheffler has a temper tantrum as PGA Championship