PGA Tour pro Kramer Hickok endured a horror situation in the greenside bunker at 12, but he eventually recovered superbly for bogey. 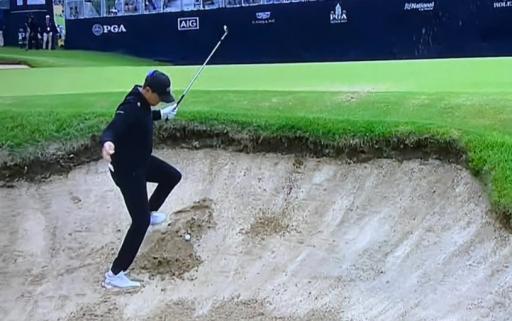 If at first you don't succeed, try, try again. That was the mental approach adopted by PGA Tour pro Kramer Hickok who endured something of a nightmare in the greenside bunker at the 12th hole on day three of the PGA Championship.

In the bunker short of the green, Hickok, 30, failed to get his third shot out of the sand as his ball struck the lip, touched him on the foot and then rolled into his footprint in the sand.

Under the updated rules of golf, there is no penalty for a ball accidentally striking you... so there was no issue there.

The big problem that remained for Hickok, however, was somehow being able to progress his ball from out of his footprint.

Despite barely being able to see his ball that was wedged under a huge clump of sand, Hickok made contact with the ball but it once again failed to find the green.

With the ball now in a cleaner lie in the middle of the bunker, Hickok splashed his ball out and holed it for an incredible bogey-five.

Kramer Hickok’s shot rolled back and hit himself, then was buried in a crazy clump of sand … then holed his 3rd bunker shot.

One of the worst lies you'll ever see in a bunker. Next shot - holes it. Incredible from Hickok #PGAChampionship pic.twitter.com/YjpZAomHLW

Hickok is well out of contention in the tournament at 6-over par as it stands at the time of this report.

The American has yet to win on the PGA Tour and is ranked 162nd in the Official World Golf Rankings.