Tiger Woods made five bogeys in a row on his way to a 9-over par 79 on the third day of the 104th PGA Championship. 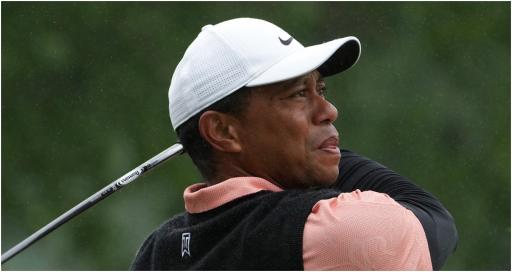 Tiger Woods made five bogeys in a row for the first time in his major career en route to a brutal 9-over par 79 on the third day of the PGA Championship at Southern Hills.

Woods began the day at 3-over and had previously set out his intent to try and win the major having told the media he had previously won tournaments after making cuts on the number.

He started the day well enough with an easy par but it wasn't long before it all fell apart and golf fans were questioning whether we would see him in the Sunday red in Oklahoma.

Woods made bogey at the second and steadied the ship with three straight pars but a devastating triple bogey at the sixth obliterated his score card.

The cat made bogey again at the seventh hole but things took a turn for the worse when he got to the par-4 ninth. He sent his tee shot into the fairway bunker but then drilled his second into the lip.

From there, he used his golf club as a cane as he looked in visible agony trying to assess the situation. He was entitled to free relief but again dropped another shot.

It meant he was out in all of 41 strokes at 6-over par. Then it got worse. A lot worse. Five bogeys in a row followed from the 10th hole. It was something he had never done in his major career.

There was also a heart-in-mouth moment for Woods' loyal fans when it looked like his surgically repaired right leg buckled underneath him and he almost fell over.

.@TigerWoods told @Amanda_Balionis off-camera that he’s not sure if he’ll play tomorrow. Will go home, get treatment and he and he’ll team will evaluate from there. #PGAchamp #golf

Tiger Woods is undecided on Sunday at Southern Hills. pic.twitter.com/0GtiajcD3B

Woods made par at 14 then managed to restore some pride at the par-4 15th when he drained a huge birdie putt from 36.8ft. Smiling, he even managed a cheeky celebration to his loyal crowd.

By the time Woods had reached the 18th hole he looked a beaten man. The weather, of course, did not help matters but it led to speculation about a possible withdrawal.

Would he ever consider giving up? You'd think not. You'd hope not. Watching Woods, at 46, trying to find to do something he once was so brilliant at is arguably more endearing then watching him annihilate the field.

However, there is no future in the past.

And this display was painful to watch and must have been sobering to play for the 15-time major champion.

By the time he had signed his scorecard, after draining a testing putt for par at 18, it contained 79 strokes which left him, at the time of writing, T-76 at 12-over par for the 104th PGA Championship.

It was his highest ever score in the major that he has won four times.

We await a reaction from Woods.

Next page: Has Tiger Woods just created a nickname for Jordan Spieth?