WATCH: Bland's day "summed up" at US PGA after squirrel moves his ball

England's Richard Bland had a terribly unlucky (and funny?!) break during Friday's second round at the US PGA Championship. 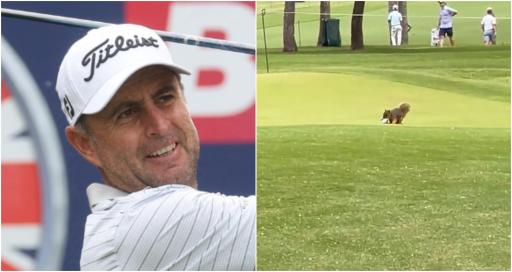 England's Richard Bland was victim of perhaps one of the funniest and unluckiest of breaks ever during Friday's second round of the PGA Championship at Southern Hills.

Bland, 49, took to social media with a video capturing a mischievous squirrel stealing his golf ball on the very same hole he made bogey on in Oklahoma.

The Englishman, who hit the headlines earlier this week over his intent to play in the first Saudi-backed LIV Golf event at Centurion Club next month, saw the funny side of what happened.

In the video, it shows the squirrel stop the ball dead in its tracks before it rolls off the green. Apparently, it was off the back of an excellent recovery shot from the trees by the 2021 British Masters champion.

"You know it's not going to be your week when you play a good recovery shot from under the trees & this little fella gets in the way," Bland posted. "To top it off the ball rolls back off the green & don't get up & down #sumstheweekup."

Under the Rules of Golf, Bland was not able to replace his ball on the green as it hadn't come to a stop. Because it was in motion when it was moved by the squirrel, he had to play it from where the ball finished.

Earlier in the week, Bland stated his intentions to play in the inaugral event of the LIV Golf Invitational Series. This was despite the threat of a suspension, fine or ban from the DP World Tour.

Bland admitted to BBC Radio Solent that at his age his best playing days are - perhaps - behind him and that he has an opportunity (by taking the money on offer) to make the next stage of his life extremely comfortable.

"How can I turn that down?" he asked.

Bland shot 74-76 at Southern Hills which gave him a score of 10-over par after 36 holes. He missed the cut by six strokes.

WATCH WHAT HAPPENED BELOW:

You know it’s not going to be your week when you play a good recovery shot from under the trees & this little fella gets in the way To top it off. The ball rolls back off the green & don’t get up & down #sumstheweekup pic.twitter.com/fL5BASuJI9