Phil Mickelson will take a one-shot lead over Brooks Koepka heading into the final round of the PGA Championship at Kiawah Island. 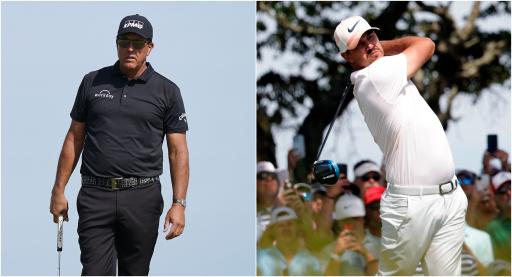 Phil Mickelson shot 2-under-par on Saturday at the PGA Championship to hold a narrow one-shot advantage over Brooks Koepka, heading into the final round.

Mickelson began the third round in a share of the lead with his playing partner Louis Oosthuizen on 5-under-par, but the 50-year-old made a superb start on Saturday with four birdies in his first seven holes.

Koepka, who is searching for his third PGA Championship at Kiawah Island, made two birdies and two bogeys on his front nine to remain on 4-under-par for the tournament, but he was five behind the experienced lefty at this stage.

Mickelson had opened up a five-shot advantage over Oosthuizen and Koepka on 10-under-par heading into the final eight holes and it looked as though the 44-time PGA Tour winner was running away with it.

But he met trouble on the back nine, starting with a bogey at the par-4 12th hole. He then hooked his tee shot into the water on the par-4 13th hole, leading to a double-bogey.

Oosthuizen made the same mistake with his tee shot on the 13th hole, but he managed to save a bogey. After Mickelson's error, Oosthuizen and Koepka were just one stroke behind on 6-under-par.

However, the five-time major champion remained calm and gave himself good opportunities in his final five holes to build on his lead, but elsewhere, Koepka found a birdie on the 16th hole to co-lead with Mickelson on 7-under-par.

Mickelson made a superb up and down on his final hole to finish on this score, which has given him a one-shot advantage over Koepka who disappointingly bogeyed the par-4 18th to drop back to 6-under-par.

World No. 31 Oosthuizen bogeyed the treacherous par-3 17th hole to fall back to 5-under-par, so he will be two strokes behind heading into Sunday.

US PGA
Bubba Watson was so dialled at US PGA he tried to hit it in the rough
US PGA
Has Tiger Woods just created a new nickname for Jordan Spieth?
US PGA
Jon Rahm's wild drive at US PGA leaves ESPN anchor with bloodied face
US PGA
Cameron Smith on hitting Wise with errant shot: "No one told me!"
US PGA
Will Zalatoris leads PGA Championship; Tiger Woods makes the cut