Phil Mickelson took a step closer to winning his sixth major title with an incredible bunker shot at the par-3 5th hole at Kiawah Island. 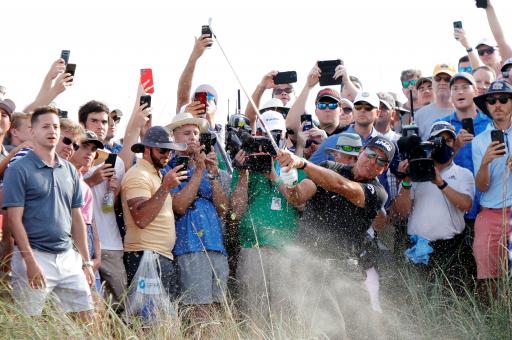 Phil Mickelson holed a fantastic bunker shot on the par-3 5th hole at the PGA Championship to stamp his authority on the tournament.

The lefthanded legend fell behind Brooks Koepka after a two-shot swing on the first hole, however, Koepka made a damaging double-bogey on the par-5 2nd hole to fall back to 5-under-par.

Mickelson had regained his one-shot advantage on his opponent when they reached the par-3 5th hole, which is 214 yards long and protected by bunkers.

Phil just did that. pic.twitter.com/g82NpdHs7M

The five-time major champion found the sand with his tee shot and it looked as though he was in a spot of bother, but this couldn't have been further from the truth.

Jim "Bones" Mackay given major memento that Phil Mickelson never gave him
Justin Thomas on BEST BOGEY of his life at US PGA: "I cold shanked it"

In true Mickelson-style, he holed the bunker shot and it was met with rapturous applause from the crowd. It was a blow to Koepka who only managed a par.

We have seen so many magic moments from the 44-time PGA Tour winner down the years that have led to him winning so many tournaments, and this could be yet another.

Golf fans were left ecstatic with the bunker shot:

Phil is on fire!! A legend showing everyone how to get things done in the course!

The caddy had his putter out. Thought he’d know better!

Pretty good for an old man.

Equipment news
New Shot Scope user dashboard to help golfers improve by managing their data
US PGA
Has Tiger Woods just created a new nickname for Jordan Spieth?
PGA Tour
Phil Mickelson's Mum: "Not too many people recognise him"
Golf news
Rules of Golf: How many shots does this player take with bizarre chip technique?
US PGA
David Duval BLASTS Phil Mickelson: "Be man enough to stand up..."