Wyndham Clark made a hole-in-one at the 17th hole at Kiawah Island's Ocean Course during his preparations for the PGA Championship. 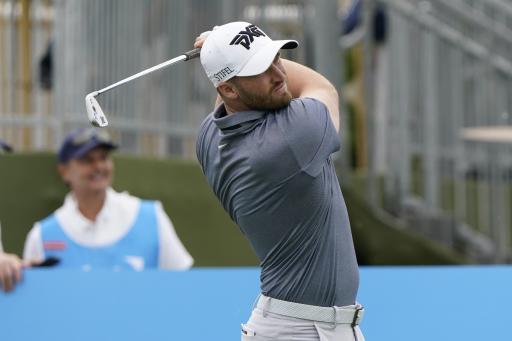 Kiawah Island's Ocean Course is set to pose a serious challenge for the players this week at the PGA Championship, but one player will have an extra spring in his step when he walks onto the 17th tee come Thursday.

Wyndham Clark made a hole-in-one at the 223-yard par-3 17th on Tuesday, much to the delight of the spectating crowd and his playing partners, which included four-time PGA Tour winner Daniel Berger.

Footage of the epic ace was posted on Instagram by PXG, Clark's club sponsor, along with the caption: "I guess drinks are on me tonight."

WATCH CLARK'S HOLE-IN-ONE IN THE CLIP BELOW:

Although Clark found the bottom of the hole on Tuesday, the penultimate hole at the Ocean Course could cause some problems if the wind starts to pick up this week.

Players will find the water if they push anything out too far right, whilst sand awaits those who pull their shot left.

"Something tells me we won’t see anyone do that again this week," one golf fan said in the comments of the video.

"How good is Wyndham Clark’s swing," read another comment.

NEXT PAGE: Jordan Spieth insists Career Grand Slam is not on his mind at PGA Championship

US PGA
Jordan Spieth insists Career Grand Slam is not on his mind at PGA Championship
US PGA
US PGA Championship 2021: Groups & UK Tee Times for Round 1 and 2
PGA Tour
Rory McIlroy: What's in the bag of the four-time major champion?
PGA Tour
Social media reacts to Sergio Garcia signing new deal with TaylorMade Golf
US PGA
Golf Betting Tips: Our TOP BETS for the 2021 PGA Championship