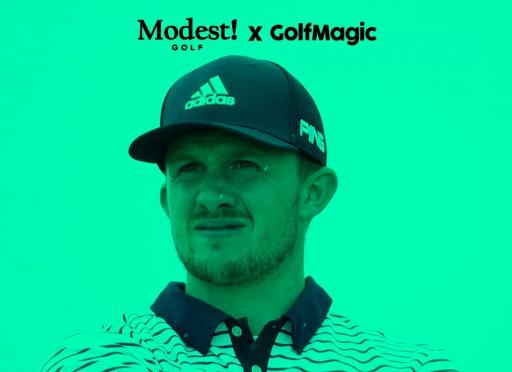 In the first of our new Stay At Home Golf Tips series in partnership with Modest Golf, we catch up with European Tour star Connor Syme and his best tip for improving ball flight with his irons.

Connor talks specifically about playing shots when in between yardages, and the simple adjustments you can make to lock in your desired distance. You also won't believe what happens when he calls out his carry yardage on his first shot!

Check out the video below, and head over to the GolfMagic Instagram page to watch more helpful golf tips and drills...

Today's #StayAtHome Golf Tip: Iron Play... brought to you by @connorsyme. Stay tuned all week for more tips from our collaboration with @modestgolfofficial...

"So we take our setup as normal, and I've got a Trackman here to show you my carry numbers to prove just how effective this drill really is," Connor told us, setting up to play with his 7-iron.

"Setup as normal and at the top of the grip. Ball position will be somewhere between the middle of my stance and my left heel. Then just give it a rip.

"This knockdown shot would be the choice of play if I was between an 8 and a 7-iron, so probably about 175 yards normally.

"So the first tip is to literally just go further down the grip by about an inch, and this is going to drop my clubhead speed right down. This should drop it down by about 4 mph with that one move.

"Setup with exactly the same position in my stance, because we don't want to lose any ball flight control as we are still trying to get this up in the air a little bit.

"[hits shot] Again, that felt good. It might be a little bit too far but it should drop both the clubhead speed [93 mph] and carry distance [181.9 yards].

"So give that little tip a try in your back garden or whenever you get back out to playing."

Head over to GolfMagic's Instagram page now for more helpful Stay At Home Golf tips from the guys and girls at Modest Golf.