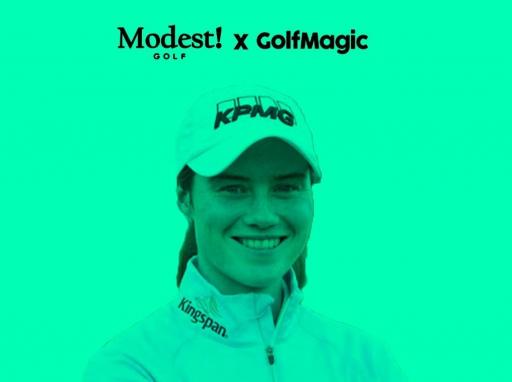 In the second of our new Stay At Home Golf Tips series in partnership with Modest Golf, we catch up with LPGA Tour rookie Leona Maguire and her best tip for improved chipping.

Maguire, who is making her debut season on the LPGA Tour in 2020, shows off one of her favourite chipping drills - perfect for the garden - where she chips balls to three different towels at different yardages.

Check out the video below, and head over to the GolfMagic Instagram page to watch more helpful golf tips and drills...

The next #StayatHome Golf Tip with @modestgolfofficial comes from @leonamaguire... Today, let's improve your chipping. Stay tuned for more tips every day this week...

"Setup wise, we're going to put the ball back in our stance slightly and just inside the right heel," says Leona, who holds the record for the most amount of weeks (135) as World No.1 Women's Amateur.

"We want the hands a little bit further forward, and you want your weight quite a bit more on your left side.

"So for chipping, we want more of a pendulum motion. There is really no need for any wrist movement in this kind of shot. We don't need a lot of power, we're not trying to generate a lot of spin.

"A lot of wrist movement ends up being quite inconsistent in high pressure situations or from tight lies. A pendulum motion is a lot more consistent and helps you perform that little bit better under pressure.

"Okay so for this chipping drill, we set up to the ball and try to land the ball on the first towel. I've got three towels set up at three different yardages.

"You can vary the towel size, obviously the smaller the towel, the harder it makes it. You don't have to use towels - you can use hula hoops, baskets, umbrellas, or anything else you've got lying around the house.

"So we setup to the ball, look at the target and chip it on the towel. Then when we've done that, we move onto the next towel, and the next towel.

"You can make it harder by varying the clubs, the size of the towel and obviously how far aware the towel is."