How to hit out of a footprint in a bunker

WATCH: Check out our latest bunker tip on how to hit out of a footprint. 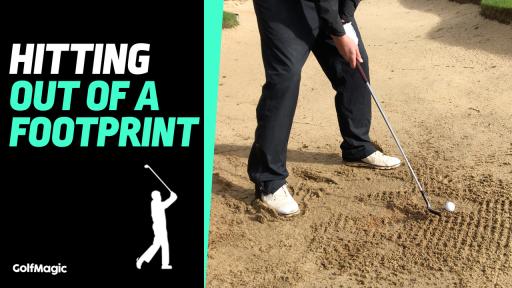 It's got to be one of the most frustrating things to see when you're on the golf course. You've got unlucky with your approah and just found the greenside bunker, but when you get down there, what do you see? Some idiot hasn't raked the bunker properly and your ball is sat in a footprint... ouch.

Well being in a footprint isn't as bad as being plugged, but it still requires a different technique. Watch the video below, as PGA Professional Paul Babbage explains the simple way to approach this shot.

"You take your normal setup as if you're playing a greenside bunker shot," says Paul.

"So we're going to stand nice and wide for stability, bed your feet into the sand. The ball goes near your left foot in your stance and you're going to start with the club one or two inches behind the ball to encourage you to get your body weight through to the left side as you hit.

"The only change you're going to make from a normal bunker shot, is once you're set, you are going to drop your hands so that they are lower. So what that effectively does, is it raises the toe end of the club off of the ground and pushes the heel of the club face down into the sand more.

"That's going to help you have a slightly steeper angle of attack when you hit your shot, without really thinking about it so it feels a bit more natural. Then you'll be able to dig into the sand a little bit more, still having the bounce, so you can hit before the ball and through and the ball will pop out."

So next time you find your ball in someone's footprint in a bunker, try out this slight change to your technique to give yourself the best chance of coming out first time.