Golfers are being invited to saddle up and sample a thrilling new experience at Quinta da Marinha in Portugal. 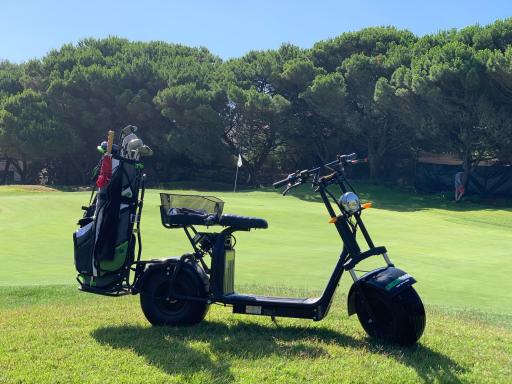 Golfers are being invited to saddle up and sample a thrilling new experience at Quinta da Marinha after the Portuguese hotel became one of the first in the country to take delivery of a fleet of new electric golf bikes.

The popular hotel in Cascais has been inundated with enquiries from players eager to try out the new chopper-style scooters on its Robert Trent Jones-designed 18-hole course since introducing the Green Ride bikes at the start of the summer.

Costing £20 per person to hire for 18 holes, the scooters are not only more fun to use than traditional golf buggies but also have the added benefit of speeding up rounds, helping to eradicate the growing problem of slow play.

European Tour star Pedro Figueiredo became one of the first golfers to take advantage of the bikes when he played at Quinta da Marinha last month and the hotel’s sales director, João Pinto Coelho, is thrilled at the feedback they have received.

Pinto Coelho said: “Everyone that has used the bikes so far have loved them. We’ve received a fantastic initial response and it’s easy to see why.

“Players are not only finding them great fun but also that they speed up the game quite a bit. Buggies are great but they do tend to slow things down a bit, especially when one player is on one side of the fairway and one’s on the other, but there are no such problems with the bikes.”

The introduction of the electric golf bikes is the result of a partnership between Green Ride and Quinta da Marinha which further enhances the five-star golf experience on offer.

The Portuguese hotel celebrated its 20th birthday in style earlier this year with a €5m overhaul of all 198 bedrooms, many communal areas and updated décor throughout, with the extensive refurbishment being unveiled when the hotel reopened last month following the Covid-19 pandemic.

A 30-minute drive from Lisbon in stunning Cascais, Hotel Quinta da Marinha is part of the ‘Great Hotels of the World’ portfolio, with its Robert Trent Jones-designed par-71 golf course offering outstanding views over the Atlantic Ocean and the Sintra Mountains.

For more information and reservations, email: reservations@quintadamarinha.com or phone (+351) 214 860 141.