Adrian Meronk became the first-ever Polish winner on the DP World Tour by securing a three-shot victory at Mount Juliet in Kilkenny. 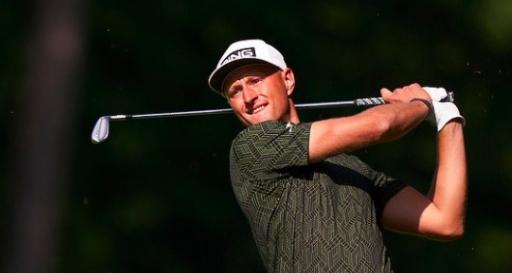 Adrian Meronk made history by becoming the first-ever Polish winner on the DP World Tour at the Horizon Irish Open, playing his last four holes in 4-under-par.

The 29-year-old overtook Ryan Fox with two late birdies and an eagle to secure a three-shot victory at Mount Juliet, propelling himself to seventh in the DP World Tour rankings.

Meronk has come third on three occasions this season, most recently at the Dutch Open. He has finally secured his first win in the professional sphere since the Open de Portugal on the Challenge Tour in 2019.

Meronk led by one shot heading into the final round and he got off to a tame start with two birdies and a bogey in his first six holes.

At the halfway stage of the final round, he was one shot behind Thriston Lawrence and Espen Kofstad who jumped to the front on 16-under-par.

Fox was also one shot behind with nine holes to play and the man from New Zealand hit the front on 18-under with an eagle on the par-5 17th hole.

Kofstad dramatically fell away with a quadruple-bogey eight on the par-4 13th hole, while Lawrence also made critical bogeys on the 13th and 18th holes too.

He set the clubhouse lead by carding his second 64 of the week, but Meronk jumped into action with back-to-back birdies on the 15th and 16th holes to take the lead on 18-under-par.

The Pole then emulated Fox's brilliance on the 17th hole with an eagle of his own. He carded a fantastic 66 to secure his first win on the tour since turning professional in 2016.

John Catlin, Fabrizio Zanotti and David Law all qualified for The 150th Open Championship as Meronk, Lawrence and Fox had all previously qualified.

Congratulations to John Catlin, Fabrizio Zanotti and David Law, who have qualified for The 150th Open courtesy of their performances at the Horizon Irish Open pic.twitter.com/wQrN2TMYIT