Patrick Reed was on the entry list for the Genesis Scottish Open at the weekend, but he has been taken off after his participation in the second event on the LIV Golf Series. 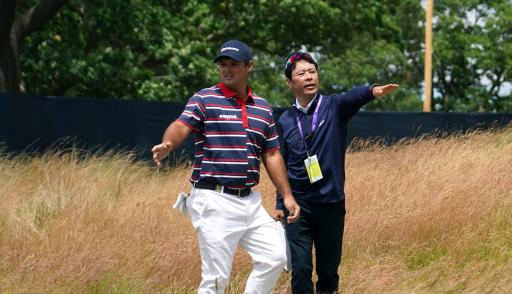 LIV Golf rebel Patrick Reed has been withdrawn from the Genesis Scottish Open having been on the active entry list over the weekend.

The DP World Tour are yet to comment on this matter, however, Reed's withdrawal has come off the back of his first appearance on the LIV Golf Invitational Series in Portland.

NEW: Jordan Spieth DISQUALIFIED from first round of the JP McManus Pro-Am after shocking mistake!

Despite being an honorary lifetime member of the DP World Tour, the divisive American will not be allowed to play at the Renaissance Club in North Berwick.

As per the sanctions set by DP World Tour CEO Keith Pelley, players who have defected from the old European circuit to LIV Golf have been banned from the Genesis Scottish Open, the Barbasol Championship and the Barracuda Championship.

The former Masters champion came tied third on his Saudi-backed league debut at Pumpkin Ridge in Portland, winning over $2 million as his 4 Aces team came top of the team leaderboard.

Reed will be denied the chance to put in final preparations for The 150th Open Championship which kicks off next week at St Andrews.

According to a report from the Daily Telegraph, a group of players are set to obtain an emergency court order today which could see them reinstated back in the field in Scotland this week.

A letter signed by 16 players was sent to Pelley that threatened legal action against their tournament suspensions and fines of £100,000. It is said that about half of the current crop of LIV Golf rebels submitted entries to play in East Lothian this week.

14 out of the top 15 players in the world rankings are set to tee it up in Scotland. It is a co-sanctioned event between the DP World Tour and the PGA Tour which is often used as final preparation for The Open Championship.

Next Page: DP World Tour Pro on LIV Golf: "I was wrong about Ian Poulter"