Talor Gooch is yet to play in a Ryder Cup or a Presidents Cup side, but he felt the atmosphere at the LIV Golf Portland Invitational was as good as these events. 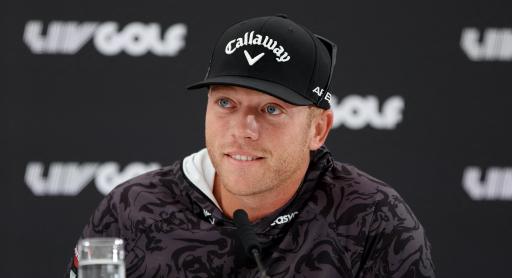 Talor Gooch raised some eyebrows and pricked some ears when he compared the atmosphere at the LIV Golf Portland Invitational to the Ryder Cup.

As the former PGA Tour player pointed out, he has never played in the Ryder Cup or the Presidents Cup, but he believes he has now experienced an atmosphere comparable to these events.

Before Gooch defected to the Saudi-backed league, he was 16th in the US team rankings for the matches that date back to 1927 when the United States beat Great Britain at Worcester Country Club.

The American may have kissed goodbye to his chances of ever playing in a Ryder Cup. He may not be able to earn points to qualify for Zach Johnson's team in 2023 and we are yet to hear of any concrete sanctions in relation to the famous team event.

"I haven't played in a Ryder Cup or a Presidents Cup, but I can't imagine there's a whole lot of difference. This is as cool as it gets. We've been saying about it all week, the energy is different and it's awesome," Gooch said after Branden Grace won at Pumpkin Ridge.

He actually said it! pic.twitter.com/jtWSNj9B9m

Gooch is one of the many players to express excitement about the team format of the LIV Golf Invitational Series, however, he has jeopardised his chances of ever playing in the sport's greatest team event.

Although the 30-year-old secured his first PGA Tour victory at The RSM Classic this season, he has achieved just four top-10s in 21 events.

He finished seventh at Pumpkin Ridge on Saturday, earning $675,000 which is approximately a sixth of his earnings since the beginning of this season.

He also earned another $750,000 for coming top of the team event in Portland alongside his partners Dustin Johnson, Patrick Reed and Pat Perez.

Gooch is arguably the most progressive player to have left the PGA Tour, but the money he has made since joining LIV Golf is nothing short of staggering.

Next Page: LIV Golf Portland: How much did each player win at Pumpkin Ridge?