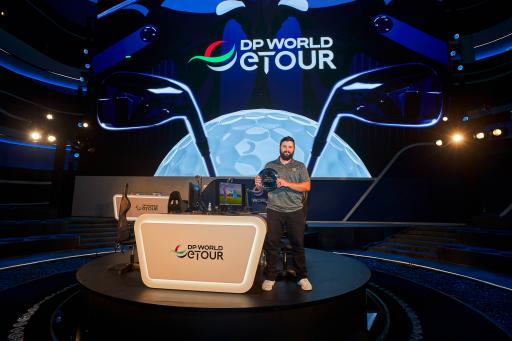 The winner of the DP World eTour Global Finals was crowned last night, in a live finale at the DP World FLOW Pavilion at Expo City in Dubai.

Four finalists, all from the USA, battled it out on the stunning Wolf Creek Golf Course in Nevada, with gamer Joshua Smithers, screen name Jsmithers, winning all three of his matches and beating Young46 in the final to take home the title.

He was presented with his trophy and prize money of $15,000 from DP World Tour star and current US Open champion Matt Fitzpatrick, who received Honorary Lifetime Membership of the DP World Tour earlier this week.

Smith, a father of five and train driver from Illinois, has now won three eTour tournaments in his career and commenting on his victory said: “It’s been awesome. Coming to Dubai, hanging out with the guys in person for the first time has been an unbelievable experience. There were some great shots there on the back nine with Jason (Young46), but I am delighted to get over the line.”

The eTour Global Final was held in advance of this week’s DP World Tour Championship, the final Rolex Series event of the DP World Tour season. The eTour saw 110,000 entries from gamers in 215 different countries, resulting in a total of 1.2million rounds started, 6.4million holes played, and 31.2million balls hit. The competition was launched in August 2022 in partnership with the leading online and mobile game World Golf Tour (WGT) by TOPGOLF, and esports specialists DreamHack Sports Games.

In the first round of matches, Jsmithers defeated the number one seed masterhacker, real name Donald Cox. Smith closed out the match on the 15th hole after rolling in a birdie putt from 20 feet. In the other first round match, defending champion Young46, whose real name is Jason Young, defeated pjbhai, real name Prajwal Prakash, one-up on the 18th hole.

In round two, Jsmithers got off to a fast start against pjbhai, storming to a four-up lead through nine holes before he closed out the match six and five. Masterhacker, arriving as the number one seed, recovered from defeat in his first game to beat Young46 despite the latter making a hole in one at the 11th.

Victory for masterhacker meant that he along with Jsmithers and Young46 could still claim the title heading into the final round of matches, depending on various permutations. But the man with his destiny in his own hands was Jsmithers. Playing his close friend Young46, Jsmithers headed into the back nine with a slender one-hole advantage. However, an eagle by Young46 on the 18th green took the match to extra holes. On the first extra hole, Jsmithers converted from 20 feet for birdie to claim the title.

Next Page: Xander Schauffele SHUTS DOWN all talk of him and Patrick Cantlay going to LIV Golf