Matt Fitzpatrick is projected to win the DP World Tour Rankings as it stands, but there is still a long way to go in the season finale. 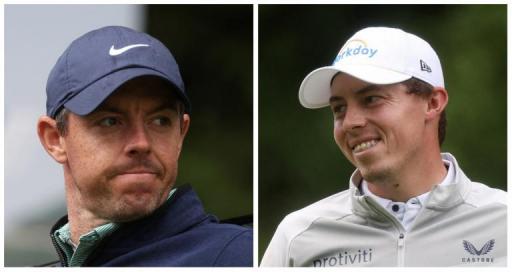 Rory McIlroy got off to a slow start by his own high standards in the opening round of the DP World Tour Championship in Dubai on Thursday, and as a result the World No.1 has lost his lead in the DP World Tour Rankings.

McIlroy had opened his account well when moving serenely to 3-under par after just eight holes, but then the wheels soon came off with three bogeys on his next eight holes to fall back to level par.

To McIlroy's credit, he did make birdie at the par-5 18th to move back into the red.

NEW: RORY MCILROY WILL (PROBABLY) HATE HIS SECOND ROUND PAIRING AT THE DP WORLD CHAMPIONSHIP!

At 1-under par though, McIlroy not only finds himself six shots off the pace in the tournament but now a projected second in the season-long race for gold.

That is because England's Matt Fitzpatrick, who received Honorary Lifetime Membership to the DP World Tour earlier this week, rattled home seven birdies in a flawless round of 65.

The round included the hottest start of Fitzpatrick's career with five birdies in a row.

After the round, Fitzpatrick said:

"I was laughing to be honest. I literally said to Billy in yesterday, when we won in 2020, didn't we have four in a row? And then we did four (birdies) in a row, and then we laughed about that and I made a fifth. It was a nice start to the day.
"I think the biggest thing I'm pleased about today is just hitting 17 greens, and the one I missed, I was a complete idiot. That was the big thing that I was happy about today is that I kept giving myself chances and putted well as well.
"I have no idea how they are getting on. The way they are playing this week, it seems that it really is one shot at a time and you've got to be on your ball. Just because of how difficult I think it is with the rough, you're missing fairways, you can't give yourself any chances. It's difficult to control the ball coming out of the rough, and certainly around the greens it's the same deal, and it's only probably going to get firmer."

Fitzpatrick started the week in third position in the DP World Tour Rankings but as a result of his fast start at Jumeirah Golf Estates, a venue he has won twice on previously, the reigning US Open champion is currently on track to win his first points race on the former European Tour circuit.

He would also win it if McIlroy finishes worse than seventh and Ryan Fox does not win.

McIlroy was understandably a little deflated after his opening-round 71:

"Yeah, certainly not what I was hoping for. 3-under through eight holes, thinking a solid start with some chances coming up and just started to drive the ball a little crooked on the back nine. So yeah, made that bogey on 12 and didn't birdie 14 or 15, and then an unforced error with the three-putt on 16.
"So it was nice to birdie the last just to shoot under par. Yeah, I don't know obviously I've had three weeks off since the CJ Cup, so I'll trying to knock the rust off a little bit there. Was enough good stuff in there. I made five birdies and hit some decent shots. Yeah, just need to be a little tidier tomorrow."

Fitzpatrick's compatriot Tyrrell Hatton matched his round of 7-under par but it could have been so much better had he not made bogey on the par-5 18th.

Sweden's Alex Noren carded a blemish-free 66 to lie just one shot off the pace after 18 holes, with Spain's Adri Arnaus a further shot back on 5-under par.

Elsewhere, Jon Rahm finished the day one shot better than McIlroy on 2-under par, while in-form Fox, who started the day in second spot in the rankings, could only manage a round of 1-over 73. That pushes the New Zealander back to third as it stands right now.

Here's the run down of the prize money on offer this week.