Case closed. Xander Schauffele tells No Laying Up that he and his best bud Patrick Cantlay are NOT leaving the PGA Tour to join LIV Golf in 2023. 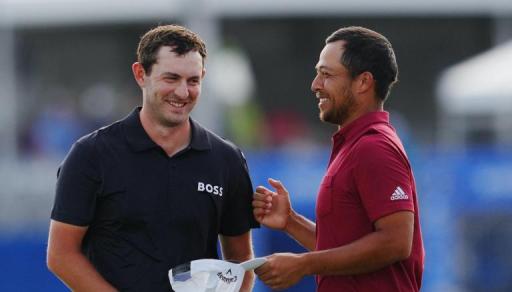 Xander Schauffele has told the 'No Laying Up' podcast that he and Patrick Cantlay will NOT be leaving the PGA Tour and joining LIV Golf in 2023, despite a number of rumours doing the rounds on social media in recent weeks.

Schauffele and Cantlay's names had been all the rage as the next potential signings for LIV Golf after this crazy rumour from an apparent 'insider' went viral on Twitter.

An article in the Guardian also appeared online that linked both of their names to a potential switch.

But right from the horse's mouth, Schauffele and Cantlay will most definitely NOT be moving to LIV Golf.

.@XSchauffele on LIV rumors, the Delaware meeting, the changes made to the PGA Tour, his relationship with his dad, how he rose through the ranks, Ryder Cup ‘23, and more.

Here's what Schauffele told No Laying Up:

"I found out in a funny way [that he was linked to LIV Golf], I pretty much just received messsages from my friends.
"Some of my friends just believed I would tell them if I was leaving the PGA Tour, and my other friends kind of texted me in disbelief thinking it was true. I was like c'mon."

"I had to weather that storm of all the social media news that I don't really get on my phone.
"I had to end up Googling what was going on, there were these articles saying that Pat [Cantlay] and I are leaving [the PGA Tour].
"So yeah, I pretty much just told everyone what I'm telling you, I haven't talked to anybody. I was pretty much minding my own business in Vegas and then this whole thing blew up.
"Why it blew up and how it blew up I have no idea, probably similar to the first time around, just random rumours that catch wind and it just blows up in your face."

LISTEN TO THE FULL INTERVIEW HERE

"The rumour mill is definitely exciting. It’s fun. Well, not for me, but for everyone else surrounding golf. It brings attention and eyeballs to our game, which I guess you can look at either half empty or half full, so that’s a good thing. It is what it is."

The latest shutdown will no doubt be a huge blow for LIV Golf execs who are desperately looking to tie down "at least seven new players" to their 2023 LIV Golf League, especially with Schauffele and Cantlay being two of the hottest PGA Tour talents in the world right now.

Sports reporter Brian Wacker, who writes for the New York Post, initially cleared up the rumour when tweeting the following last week:

"Some LIV Golf news: Xander isn’t going, despite, ahem, “report”; TV deal will be with Fox Sports in some capacity; 5ish events in US next year. Related, if/when they get world ranking points, that changes equation for some."

Next Page: Why 5-time PGA Tour champion will not join LIV Golf - "Greg and I had a SPAT"