Billy Horschel fulfilled one of his lifelong dreams when he won the BMW PGA Championship in 2021, completing a clutch one-shot victory. 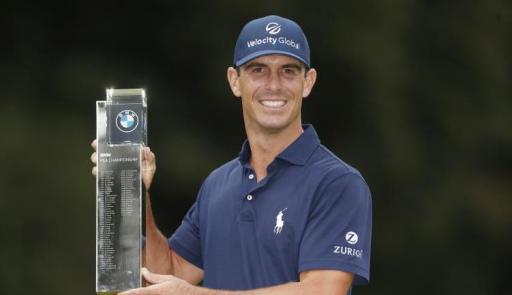 Billy Horschel has confirmed his attendance at this year's BMW PGA Championship, returning to defend his first-ever title on the DP World Tour.

Joining the American at Wentworth in September will be fellow former champions Tyrrell Hatton and the former Masters champion Danny Willett.

Horschel won his first Rolex Series event when he birdied the famous 18th hole to clinch a one-shot victory. The 35-year-old was a popular winner who claimed to have watched the tournament at home as a child.

He also became just the second American winner of the event since the great Arnold Palmer in 1975 and he could become the first player to win the event in consecutive years since Luke Donald in 2012.

"I cannot wait to return to defend my BMW PGA Championship title at Wentworth," Horschel said.

"It is a tournament which has always been close to my heart, so to win the way that I did, in front of the supportive crowds, was incredible.

"It will be so much fun stepping onto that first tee and being announced as the defending champion, and I have a really strong record at Wentworth so hopefully I can bring my A-game once again and put up a strong title defence."

Hatton won the tournament in 2020 by four shots from Frenchman Victor Perez and this was his third of four victories in Rolex Series events on the DP World Tour.

The Englishman is also a winner on the PGA Tour after sealing victory at the Arnold Palmer Invitational in 2020. He is as excited as Horschel to return to Wentworth.

"The BMW PGA Championship is always one of my favourite weeks of the year. It’s an event I regularly attended as a kid and one of those ones I always dreamed of just playing in, never mind winning," said Hatton.

"The event seems to just get bigger and bigger every year and the crowds are always really supportive. I also get to play in front of family and friends which is pretty special. It should be another great event."

Next Page: The BEST Peter Millar golf shorts to wear in the sun!