Guido Migliozzi was 5-under-par with one hole left of his first round at the Lakes Course in Tarragona when darkness halted play. 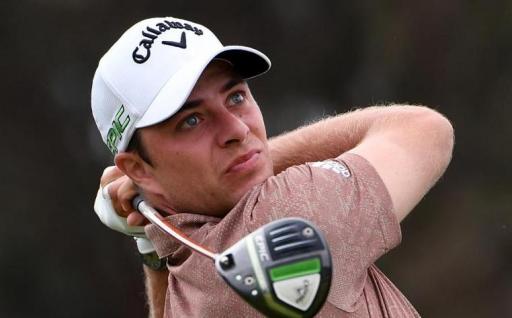 Top European prospect Guido Migliozzi was just one shot off the lead when darkness halted play in the first round of the ISPS Handa Championship in Spain.

The young Italian began the first day on the Lakes Course in Tarragona with a bogey on the 1st hole, but he put this behind him with birdies on the 2nd and 4th holes.

Then from hole 8 to hole 13, he made five birdies. Migliozzi propelled up the leaderboard and although he bogeyed the 16th hole, he finished his day on 5-under-par.

The 25-year-old is one of Europe's most exciting prospects on the DP World Tour and he confirmed his potential when he came tied fourth at the US Open in 2021.

Play has been suspended in Spain due to fading light.

Round 1 will resume at 08:10am local time.#ISPSHandaChampionship

The 44th Ryder Cup is to be held at Marco Simone Golf and Country Club in Guidonia Montecelio near Rome in 2023 and Migliozzi will be doing all he can to make Henrik Stenson's European side.

He is one shot behind a group of four players on 6-under-par. Johannes Veerman and Tapio Pulkanen were the two leaders who managed to finish 18 holes.

South African Hennie Du Plessis and the Indian S.S.P Chawrasia have two holes left in their first round. Chawrasia made an incredible eight birdies but two bogeys in his first 16 holes.

Another player looking to join Migliozzi on Stenson's Ryder Cup side next year is Rasmus Hojgaard. He is also 5-under-par, but he has three holes left to play on Friday morning after a rain delay of over two hours on Thursday morning.

The three-time DP World Tour winner has made five birdies in his first round and is currently bogey-free. David Law and Jack Senior complete the group of four players on 5-under-par.

Next Page: Ryan Palmer reveals how he lured Scottie Scheffler at Zurich Classic