Cameron Smith found the middle of the fairway on the par-4 5th hole at Victoria Golf Club, but his ball finished in a divot hole at which most golfers would despair. 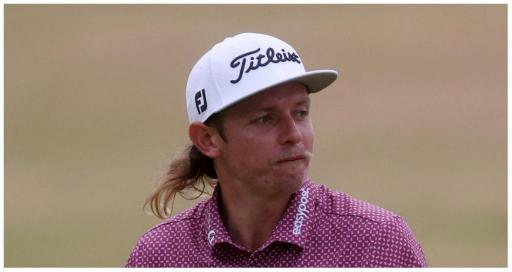 Cameron Smith has relished returning to Australia and competing in front of a home crowd. This was evident in Brisbane last week when he won his third Australian PGA Championship.

He hasn't shown the same heroics after 18 holes of the ISPS Handa Australian Open, but he did show in the first round that he feels comfortable playing any shot from any situation on home turf.

On the par-4 5th hole at Victoria Golf Club, one of two golf courses being used this week, the Open champion found his ball in the middle of a divot hole and it also appeared the divot was rested up against the ball too.

A peculiar lie indeed and Smith had to swallow the bad break and take his shot. That he did and the 29-year-old incredibly found the centre of the green, stopping his ball dead on the putting surface about 15 feet from the hole.

He may not have rolled in the birdie putt in what would've been typical Cameron Smith style, but the crowd certainly enjoyed a shot that most golfers would despair at.

Cameron Smith with a brilliant shot from a horrid lie #AusOpenGolf pic.twitter.com/Oc9KtxbWKX

Smith shot a 1-over par 71 to sit eight shots behind fellow Aussie David Micheluzzi. Micheluzzi made eight birdies and one bogey to take an early three-shot lead.

Ahead of the tournament sanctioned by the DP World Tour, Smith defended LIV Golf CEO Greg Norman after Tiger Woods called for him to leave his leadership role with the breakaway series.

In a press conference at the Hero World Challenge, Woods echoed the comments made by Rory McIlroy at the DP World Tour Championship and believes LIV Golf and the PGA Tour "can talk freely" once Norman steps aside.

"He believes in what he does. Maybe sometimes Greg comes off a little bit abrasive, but he’s just trying to get a point across. He really does believe in this thing," Smith said to the Sydney Morning Herald.

"I’ve spoken to him a million times (at) the last four or five events. He believes in it and he thinks it’s a good product. If you were (to attend) Miami, it’s hard to see how it’s not going to work. Miami was such a turnout. It was unbelievable. The atmosphere was awesome."