Despite saying that Greg Norman can be a "little bit abrasive," Open champion Cameron Smith asserted that his fellow Aussie is fully invested in LIV Golf. 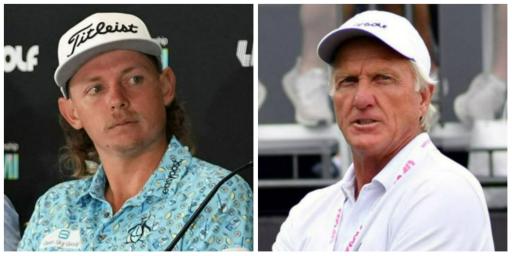 LIV Golf rebel and Open champion Cameron Smith leapt to the defence of Greg Norman after Tiger Woods called for his departure as boss of the Saudi-financed league.

Speaking to the Sydney Morning Herald, Smith admitted that Norman can be "a little abrasive," but he pledged support for his fellow Aussie by describing his passion for the breakaway series.

Smith particularly praised the fan attendance and the atmosphere at the LIV Golf Team Championship at Doral in Miami, which saw himself and Dustin Johnson battle down the stretch for their teams, Punch and 4 Aces.

The 29-year-old has come to the support of Norman in a timely fashion after Woods called for the former World No.1 to leave his role as CEO of LIV Golf. Woods echoed the thoughts of Rory McIlroy at the DP World Tour Championship who said Norman should "exit stage left."

Smith, who won his maiden major title at St Andrews in July, was a major acquisition for the new league which has caused a divide in professional golf. He captained Punch which included three other Aussie players and the home nation core that Norman wanted.

"He believes in what he does. Maybe sometimes Greg comes off a little bit abrasive, but he’s just trying to get a point across. He really does believe in this thing," Smith said.

"I’ve spoken to him a million times the last four or five events. He believes in it and he thinks it’s a good product. If you were (to attend) Miami, it’s hard to see how it’s not going to work. Miami was such a turnout. It was unbelievable. The atmosphere was awesome.

"They’ve gone about things a little bit differently as far as golf is concerned, but they believe in the product and that’s what you want."

Smith won the Australian PGA Championship for the third time at Royal Queensland last week, but when it came to the Official World Golf Rankings, his position of third didn't change.

LIV Golf thought it had made a breakthrough with regard to OWGR points when it entered a strategic alliance with the little-known MENA Tour of the Middle East and North Africa.

However, the board of the OWGR put the application up for review to decide if LIV Golf events should receive ranking points, despite being affiliated with a legitimate tour that is recognised by the OWGR.

Smith's LIV teammate Marc Leishman knew that moving to the rebel league could mean losing out on OWGR points, but if moving to 72 holes as opposed to 54 holes helps LIV's application, this is something he'd be open to.

Average field sizes and providing a Q-school are examples of other criteria that LIV Golf must address as the series' competitors tumble down the rankings.

Leishman won six times on the PGA Tour and his world ranking position was one factor he considered before making the controversial switch.

"I think if that’s what it took (72 holes), I think I would be open to it. But one of the things that we knew when we went over to LIV was that there might not be world ranking points and that was one of the things I certainly took into account when making a decision," he said.

"So again, that’s out of my control. I’ll go about my business and if we get them - which I hope we do - I would love that. I don’t know what will happen if not, but I think it should happen."